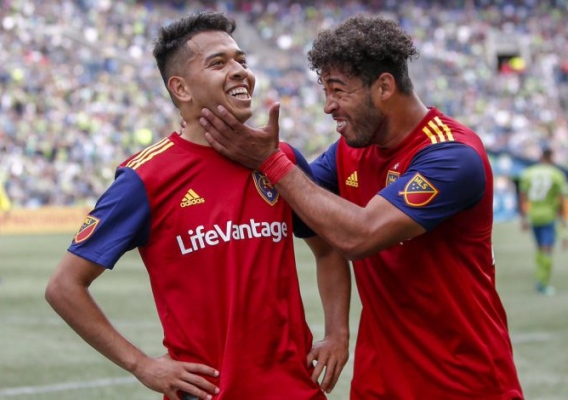 There was a lot to digest from MLS in Week 19 but it is good to see that Sporting Kansas City is trending younger to join the likes of other young MLS teams like the Red Bulls, Philadelphia, Dallas, and Real Salt Lake. The New York derby wasn't great but it sets up a big game this weekend for the Red Bulls.
BY Brian Sciaretta Posted
July 09, 2018
12:20 PM
IT WASN'T the debut Chris Armas wanted but former Red Bull manager Mike Petke has his Real Salt Lake team on the rise. Elsewhere, Sporting Kansas City is finally getting younger and the kids are showing they can play.

Here are some of my thoughts for MLS in Week 19.


It was not the coaching debut that Chris Armas was hoping to achieve. In his first game since taking the reigns as the team’s permanent head coach from the departed Jesse Marsch, Armas lost his debut to team rival New York City FC 1-0 in the Bronx on Sunday.

The first half was very poor from both teams. The second half picked up and the Red Bulls seemed to control more of the game in the second 45 minutes. But finishing was poor for the Red Bulls and the inability to find the back of the net left it vulnerable to a defensive mistake. That happened in the 86th minute when Aron Long’s turnover gifted a Maxi Morales goal.

It is just one game into the Armas tenure as head coach but in his first game, he did not make a substitution until after NYCFC scored. That alone has led to second guessing among the Red Bulls supporters.

But just like how his predecessor Jesse Marsch inherited a tough situation where every decision he made was under a microscope, the situation is similar for Armas. It was a tough way to lose a game, especially to a rival.

The home game against Kansas City is looking like a very important game for the Red Bulls to build confidence under its new coach.


One of the more exciting developments in recent weeks in MLS has been the progress of Sporting Kansas City fullback Jaylin Lindsey, 18, who has now played in five games (four starts) in his first professional season.

Lindsey, a veteran of the 2017 U-17 World Cup, has shown steady improvement since breaking into Perter Vermes’ squad. Although it hasn’t always been pretty, Lindsey has been part of a much needed youth movement in Kansas City.

Peter Vermes has had success over the years with Sporting Kansas City but a lot of that has been with a well-established core that knows the league very well. Graham Zusi, Matt Besler, Seth Sinovic, Ike Opara, and others make up a core that has been together for years. But what will come next for a Kansas City team could very well be the best team in the Western Conference.

There are a lot of good young players for Sporting Kansas City but they need to get minutes. Lindsey is a good player who can play both right and left back. His development is promising.

Could he feature for the U.S. U-20’s this year? Perhaps but it is hard to see why Sporting Kansas City would let him go for qualifying since the team is almost certainly going to be in the playoffs this year.

Real Salt Lake has won consecutive games the past week over quality opposition in Sporting Kansas City (4-2) and FC Dallas (2-0). A big reason why the team has been successful has been the play of young American attackers Bofo Saucedo and Corey Baird. Saucedo, a 2017 U-20 World Cup veteran, and Baird, the rookie of the year front runner, are scorings goals and creating chances on a regular basis.

The result is an improved situation for Real Salt Lake which has looked very poor at times earlier this year. Still, the test for this team will be to play well away from home and not simply dominate at home in the high altitude.

Saucedo has always had talent but over the past few months it finally looks like he is putting it all together. He can strike from distance and beat defenders on the dribble – even if he is not the fastest player.

Baird, 22, is beginning to distance himself from Chris Mueller for the rookie of the year as Mueller and Orlando are struggling mightily. Baird has five goals and two assists in 17 games (12 starts) but is looking more comfortable in his role as the season progresses.

Can the Galaxy turn it around?


For better or for worse, the MLS season can be very forgiving and no team is ever truly out of contention at this point in the season. On May 12, the Galaxy lost to Dallas by a 3-2 score and it was the club’s fourth consecutive defeat.

Since then, Sigi Schmid’s team has enjoyed steady improvement and Saturday’s 4-0 win over Columbus was the high point of its season. Columbus, normally a strong defensive team, was simply overrun by the Galaxy attack.

The Galaxy was simply underachieving at the start of the season but there is no question that the roster had a ton of talent. Even if it was one of the older teams in the league, the Galaxy still had the potential to win any game on talent.

The win over Columbus could be a sign that the team is starting to put it all together. With Zlatan, Ola Kamara, both Dos Santos brothers, and Sebastian Lletget (currently injured), there is a lot of talent in the team’s front six.

Due to its poor start, the Galaxy are still out of the playoff positions in eighth place. But it seems like just a matter of time before it overtakes Houston and Vancouver for the sixth spot.


Nothing is working right now for Orlando City which is a total mess. On Saturday, the club was routed by Los Angeles FC 4-1 for its ninth straight defeat. Jason Kreis began the streak, interim coach Bobby Murphy continued it, and now new head coach James O’Connor owns it. Bottom line is that no one has been able to find a solution.

At this point of the season, O'Connor is already question his team's mental toughness.

Over the nine game losing streak, Orlando has been outscored by a laughable 27-6 margin. When you look at the roster, you see a talented group of veteran players but it is looking like a lost season right now and perhaps a rebuild ahead.