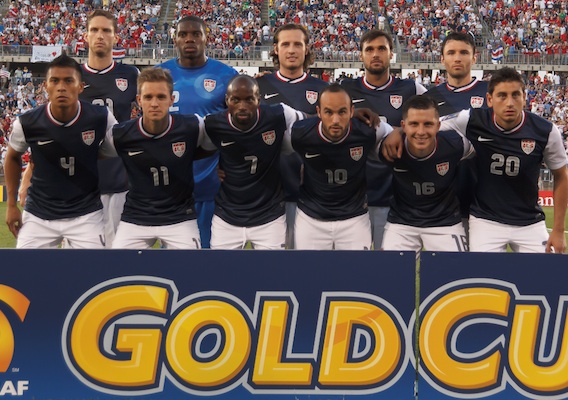 The 2013 Gold Cup isn't just about hoisting a trophy or getting closer to the 2017 Confederations Cup. It's about American players fighting for seats on the plane to Brazil. Here is our mid-tournament take.
BY Daryl Grove Posted
July 18, 2013
12:20 PM
Three Gold Cup games down and, assuming the U.S. makes the final, three games to go. To mark the halfway point, let’s step back and take a look at the U.S.’s victorious Group C campaign. Which five players most improved their credentials and increased their chances of spending the summer of 2014 wearing the red, white, and blue in Brazil?

We all knew he had something to offer, we just weren’t entirely sure what it was and where it should go. But now we know: Corona has quick feet (his pass down the line launched the counter attack against Costa Rica), more than one trick, can whip in a dangerous cross, and has a knack for venturing into the penalty area at just the right moment. Forget about Josh Gatt for now, the U.S. has found another right winger.

Previously, his best-known national team contribution was the goalkeeping error that allowed El Salvador to equalize in the 85th minute and cost the U.S. a spot in the London 2012 Olympics. And with Nick Rimando looking perfectly fine in the first two Group C games, Sean Johnson starting against Costa Rica looked like a bit of a gamble. But it was Johnson’s late tip on to the bar that not only prevented the U.S. from losing, but actually started the counterattack that led to Shea scoring the winner less than 30 seconds later.

In his first nine games for the U.S. national team, Wondo was goalless—a poacher poaching nothing but goose eggs. And yes, his next three games were against Guatemala’s U-15s, then Belize and Cuba. But in those games Wondo showed some Klinsmann-like six-yard-box skills to grab six goals in three games and, thanks to a kitman error, wrote his name into U.S. Soccer folklore. Yes, he was toothless against the Ticos, and no, he still may spend next summer in San Jose. But the days of everyone—including Wondo himself—thinking he’d never ever find the back of an international net are over.

If you’ve questioned Donovan recently, you’ve been proven wrong. Question his commitment? Watching him sprint the length of the field to tackle Cuba’s Martinez should fix that for you. Question the impact he has on team spirit? The camp is a love-fest, with Donovan at the heart of it. Question his effectiveness at 31 years old? That perfect, one-time crossfield counter-attacking pass for Brek Shea to score against Costa Rica says otherwise. Donovan is back.

Absence made U.S. fans’ hearts grow fonder of Stu Holden, so there was a very real danger that the midfielder would disappoint on his long-awaited return. I would have settled for seeing Holden make it through the group stage without something tearing, snapping or rupturing. But in 45 minutes, then in 58 minutes, and then in 90 minutes, Holden reminded us what he can do: Move the ball quickly and cleverly in midfield over distances short or long, and contribute to the attack with clever little chips and the occasional cool finish.


 Young Mix Diskerud served several reminders that he has plenty to offer any team that wants to play possession soccer, Jose Torres offered a threat down the left and shown a knack for accommodating an overlapping left back … speaking of which … Edgar Castillo confirmed against Cuba that he’s not going to defend the left flank, but he’s more than a little useful attacking down it, while both Clarence Goodson and Michael Orozco Fiscal have produced dependable performances in central defense.


Hurt their chances a little

Michael Parkhurst had the opportunity to grab hold of the right back slot this summer, but has given it up by surrendering possession too many times. Tony Beltran had less chance to begin with, but replicated a lot of Parkhurst’s mistakes anyway. Oguchi Onyewu’s comeback trail is at least temporarily closed after leaving the roster with an injury. Alejandro Bedoya has been outshone by Joe Corona on the right wing and so slips a little further down the invite list, while Brek Shea—despite the goal against Costa Rica—had one of the worst halves of soccer ever seen in a U.S. jersey against Cuba. We were all secretly (or not-so secretly) hoping Jack McInerney would terrorize international defenses just like he does in MLS, but seems Klinsmann got a closer look and decided the young man wasn't quite ready yet. OK, time for you to chime in. Agree or disagree with our selections? Share your thoughts below. Daryl Grove is an ASN contributor and the co-host of the Total Soccer Show, a radio show and podcast for American soccer fans. Subscribe to the show via iTunes.