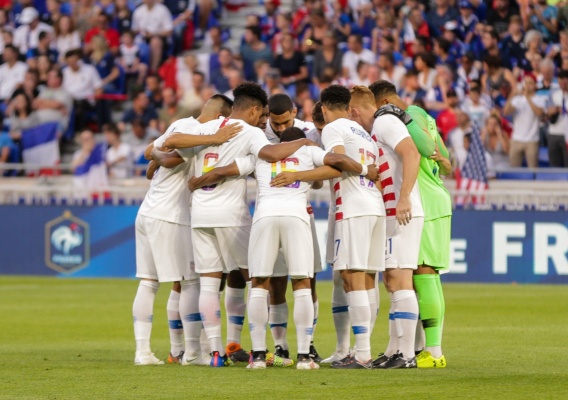 5 thoughts on the USMNT draw with France

International friendlies are typically a valuable opportunity for coaches to learn about players and experiment formations. While France controlled possession, the U.S. team fought hard for a 1-1 draw. Brian Sciaretta gives his 5 thoughts from the game.
BY Brian Sciaretta Posted
June 09, 2018
6:00 PM
THE UNITED STATES national team played to an impressive 1-1 draw against World Cup favorite France on Saturday. The team will now be off for the next three months as new general manager Earnie Stewart gets ready to implement changes.

But the draw will give the young players momentum and confidence heading into a new cycle, under Earnie Stewart as GM, and with a new coach to be determined.

But beyond the scoreline, here are the specific takeaways from the draw against France.


For several years it has always seemed as if Zack Steffen had the talent to be a very good No. 1 goalkeeper for the U.S. national team. But the past year he has clearly turned the corner.

The University of Maryland product was a standout for Columbus last year in the playoffs. In May of this year, he was the MLS player of the month for May after he did not concede a goal the entire month and still has a league shutout streak of over 500 minutes. Now he was the Man of the Match in a draw against France.

In the game, Steffen made several big saves in the second half including a free kick against Nabil Fekir and a stoppage time combination on Fekir from distance and close range from Ousmane Dembele.

Steffen is the deserved No. 1 heading into the next cycle and he is an option American fans should be feeling very good about that prospect.


When Sarachan announced his starting lineup, the biggest surprise was the five man backline that featured three central defenders and two wingbacks. It is not the first time the U.S. team has played with this formation but it is rare.

This formation makes sense and seems to fit the next group of players well. Antonee Robinson is a very fast left back that is competent defensively but who likes to get forward. DeAndre Yedlin didn’t start but he is the top right back and lately he has struggled to get forward. With three central defenders, he has more cover to move forward.

Matt Miazga, Erik Palmer-Brown, and Cameron Carter-Vickers all have strong chemistry between them and now play in Europe where this formation is more common. Carter-Vickers has been playing in a three central defender formation most of the season. Meanwhile, Tim Parker looks like a smart defender who can easily adapt.

Much will depend on who the next head coach is, but this formation could definitely emerge as a real option.

A lot of the players who played well against France were known. Steffen, Weston McKennie, and likely Tyler Adams are starters for this team. But which players improved their stock the most?

Antonee Robinson was clearly in this category. After a season where he played over 2500 minutes for Bolton, the English-born Robinson is an exciting new player for the U.S team. He provides speed and competence both defensively and offensively.

Tim Parker’s stock clearly improved this camp. He was strong against Ireland off the bench and was very strong against France – where he helped cover for Cameron Carter-Vickers on multiple occasions. Instead of as a possible sixth-best central defense option in the player pool he could be inside the top four.

Wil Trapp also did well. While France did get the better of him at times, that was unavoidable given France’s elite quality. But Trapp also displayed several instances of quality on the ball. His defense was also a lot sharper than expected. Sometimes Trapp can struggle against physical opponents but he had several important defensive plays in this game as well.

Too many cheap giveaways


If the U.S. team wants to be able to compete with top level oppositions more often and hold more of the ball, it needs to avoid cheap giveaways. Every player on the U.S. team was responsible for these mistakes over the course of the 90 minutes. There were still too many bad passes in the middle of the field or in their own third which gifted opportunities to France.

The good news is that the mental side of the game can improve with experience. With more minutes at their clubs, players can learn to avoid taking the risks with certain passes.


The Weston McKennie – Tyler Adams central midfield pairing is important to monitor because both players looks as if they will have a presence on the team in the years ahead.

In the game, both players were very good defensively. Adams covered a ton of ground to breakup plays for France and help disrupt their midfield. McKennie was similar in that he also provided a physical presence in the midfield that was needed.

Offensively, both have a big upside but both still have a ways to go. It is sometimes easy to forget that they are both teenagers.

Both McKennie and Adams can hit dangerous passes that can create a scoring opportunity. Overtime, their passing range will need to improve and mistakes on the ball will need to become minimalized.

This game was a good learning experience. Both players played well but have a ways to go if they want to be a pairing that can take the game to top oppositions.