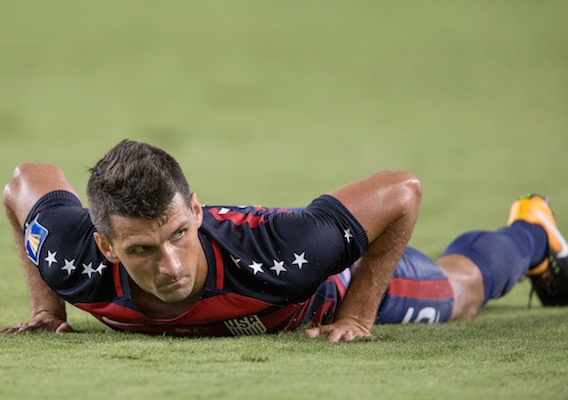 5 Thoughts on the United States' Win Over Martinique

ASN contributing Brian Sciaretta watched the U.S. - Martinique match a second time so you wouldn't have to suffer through another 90 minutes. Here are five takeaways from his second-day experience.
BY Brian Sciaretta Posted
July 13, 2017
8:00 AM

WHILE IT'S TRUE that the U.S. national team defeated Martinique on Wednesday night, neither Bruce Arena nor his players should be particularly proud of the performance. For the second straight game at the Gold Cup, the Americans took a lead but failed to take its opponent out of the game.

Upon second viewing of the contest, there are plenty of reasons for concern, both tactically and defensively. The central defense pairing of Matt Hedges and Omar Gonzalez lacked chemistry, set pieces were disappointing and what should have been an easy win proved to be a tense struggle for 90 minutes.

Here are some of the issues that jumped out at me as I re-watched the morning after.

Until he was taken off in the 62nd minute, Kellyn Acosta was having a pretty good game. The U.S problems at that point were tied to its inability to finish its golden chances. Outside of a shot off the post in the first half, Martinique had nothing going on. The players were generally in good position to finish chances but couldn't fill the net.

Acosta was leading the way in touches and was generally a useful shield between the midfield and the backline. When Alejandro Bedoya replaced Acosta, however, it had brutal defensive consequences for the U.S.

Bedoya made a nice play two minutes after coming into the game when he was part of the build-up to the second goal. But Bedoya was playing in a more advanced position than Acosta and that created a big gap between the midfield and the backline. Not only did Martinique score both of its goals after Acosta left the game, it also had its foot on the gas pedal for stretches.

Notice that when Dax McCarty entered the game in the 86th minute, things improved pretty quickly for the Americans. Martinique tried to attack up the middle but found it much harder with McCarty filling that gap.

The central defenders were not good on the night but a lack of clarity in the central midfield really hurt the team more.

Gyasi Zardes has his limitations as a soccer player. His touch, decision making, and finishing can be lacking at times. But he does have considerable strengths. His movement is sometimes pretty good and he can find ways to get himself into dangerous positions—either via his physical strength or making smart runs. His limitations are usually frustrating to fans because he is often not invisible in games. He gets involved but then sometimes that final piece is missing.

Then, sometimes, it all works for him. He had some positive moments at the Copa America last year and he had mixed, but overall positive impact on the game yesterday.

Martinique is not a good team but Zardes did very well to pick out Morris on the winning goal.

This game featured all aspects of Zardes—the good, the bad, and everything in between.

DeAndre Yedlin is the starting right back for the national team—that much is clear. Last night, though, Eric Lichaj made a solid case that he should be the team’s backup. He moved into space very well and was comfortable getting forward. His assist on the second goal was a very important individual effort.

The Chicago native was fast tracked into the national team in the last year of Bob Bradley’s tenure but Jurgen Klinsmann’s decision to virtually blacklist him was questionable given the lack of options at right back after Steve Cherundolo’s retirement. Lichaj is a talented player and while he may not be a World Cup starter, he can be a backup for both the right and left fullback positions.

Lack of a killer instinct

“We're certainly guilty of making the game a lot more difficult on us than it needed to be,” Arena lamented after the game.

The U.S. team needed far more urgency in the first half. It had several good opportunities—Morris missing an early header and Paul Arriola following suit right before the break—but could not capitalize.

In terms of preventing upsets, the Yanks, when favored, need to do more to take opponents out of games early. In these last two games, the U.S. allowed the game to go scoreless into the break. Then, when it took a lead in the second half, the U.S. allowed opponents to equalize.

The team is making it hard on themselves and is quickly learning the difference between friendlies and competitive games with motivated opponents. This tournament will continue to be a test of mentali strength. Younger and/or newer national team players need to recognize that the stakes are higher, and the competition more fierce, on the international stage.

Gonzalez said it best afterward: “Moving forward, we need to be smarter and more focused throughout the entire game, and be harder to play against."

Jordan Morris earned man of the match honors last night and he looked decent coming off the bench against Ghana and Panama. On the winning goal he not only made the finish but he also made the first pass of the build-up.

A confident Morris is a valuable asset. He is the fastest forward in the mix, and in an open game he can make smart runs and create chances.

Dom Dwyer impressed in his first two starts for the Stars and Stripes, scoring two goals and making a clear argument that he belongs. But if Arena takes four forwards to Russia, he will have to make some tough decisions. The pool looks something like this right now:

If healthy, that sets up a battle between Morris and Dwyer for the final spot. Morris’ speed might give him the edge because he can bring something different to the table. That said, the top three names on this list have a lot of time dealing with injuries and health scares, so the battle for a seat on the plane to the 2018 World Cup is wide open.