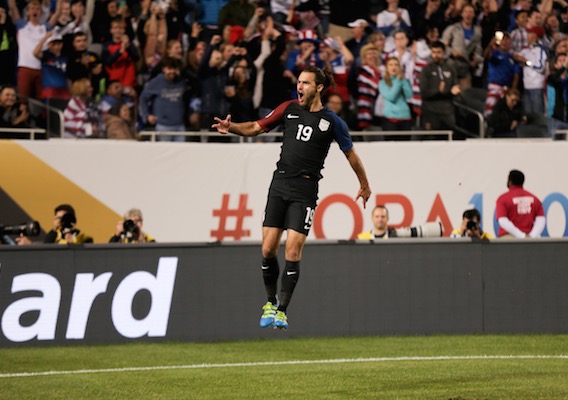 5 Thoughts on the United States' Win Over Costa Rica

Jermaine Jones and Michael Bradley aren't always on the same page, but they were tonight against Costa Rica. Brian Sciaretta has more on this pairing and other key observations.
BY Brian Sciaretta Posted
June 07, 2016
11:55 PM

JURGEN KLINSMANN'S U.S. men's national team got the important win it needed against Costa Rica in a lopsided 4-0 result in Chicago's Soldier Field. It was a big turnaround from the loss in the opening game and while quality difference between Colombia and Costa Rica was a big reason, so was the improved performance from the Americans.

Now the U.S. can advance to the quarterfinals with a win or possibly even a draw against Paraguay on Saturday night.

Here are my thoughts on Tuesday night’s crucial win over the Ticos.

The Jermaine Jones-Michael Bradley central midfield combination predates Jurgen Klinsmann’s tenure and the German-American coach used that pairing in his first game in charge of the national team. Both are good players but the combination has only rarely lived up to its potential.

Jones had an incredible game in all facets of the game. Bradley did not get in the way of Jones. Instead the captain sat deeper and distributed quality passes from deep positions. They played well as a unit and when that happens the U.S. is very difficult to beat.

If these two put forth a similar outing in their final game of Group A their chances of beating Paraguay are very good.

Brooks enjoyed a great season at Hertha Berlin and was rewarded with a nice, new contract. Now with the national team, he has had a breakout run of four games where he has emerged as player who can help the U.S. for a decade.

Until a few off moments late in the Costa Rica game—after the outcome was already established—Brooks was outstanding. He easily broke up plays and swept up any kind of chance Costa Rica put forward. His presence on the backline seemed to lift the rest of the team, and he has displayed a nastiness that no doubt makes attackers think twice when he is in the neighborhood.

Big credit should go to Geoff Cameron too. For most of his international career, Brooks has been paired with partners who were struggling. Whether it was Michael Orozco or Ventura Alvarado (Brooks’ partner at the 2015 Gold Cup), Brooks was not in a great position to succeed. Now partnered with the established Cameron, Brooks is emerging into a player who can be a top-class central defender.

3. Will Zardes factor this weekend?

Klinsmann's decision to stay with the same lineup paid off. Now moving into the Paraguay game, which will be the U.S. team’s second straight game on three days of rest, Klinsmann will have some tough decisions to make.

The most important of which will involve Gyasi Zardes who was once again struggled to make a positive impact on the game. He wasn’t awful but his first touch and decision making killed too many opportunities. The problem for the Los Angeles Galaxy attacker is that others are making a better case for playing time. Graham Zusi looked sharp in his few minutes on the field and his goal was a superb effort. Then you also have Borussia Dortmund teen Christian Pulisic who has also done well in recent contests.

If there is going to be a change in the starting lineup, this is one place to keep an eye on.

Late in the first half, the United States switched from a 4-3-3 to a 4-4-2. Klinsmann deserves credit for making that adjustment, as it was helpful in a few different ways.

First, it gave the U.S. a wider midfield base, which stretched Costa Rica’s defense. The width opened up the game and the U.S. seemed to control the midfield far easier. It also provided better numbers defensively.

Second, it really helped Clint Dempsey who had a tremendous game with two assists and a goal from the penalty spot. The tactical shift moved Bobby Wood closer to Dempsey up top for support. With three goals in the first half, clearly the move paid off.

As the tournament progresses, the ability to shift tactically and meet the needs of the games will give the U.S. an important edge

Dempsey’s goal from the penalty spot early in the game was his 50th international goal. Think about these numbers:

Share your take on Brian's take in the Comments section below.