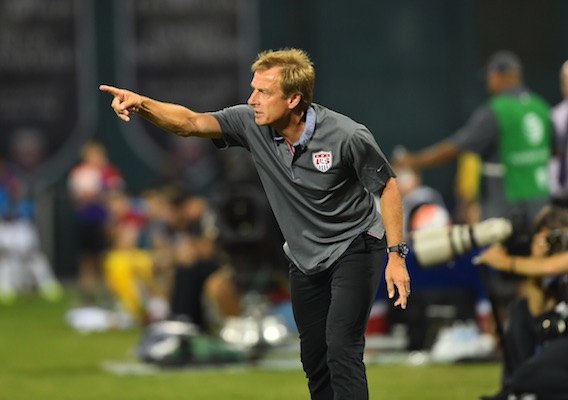 5 Thoughts on the U.S. Win Over Peru at RFK Stadium

Yes, the Yanks defeated Peru 2-1 Friday night, but what did the U.S. performance tell us about the team's outlook for the Oct. 10 showdown against Mexico? Brian Sciaretta has plenty to say about that.
BY Brian Sciaretta Posted
September 05, 2015
7:30 AM

THE U.S. MEN'S NATIONAL TEAM defeated Peru Friday night in Washington D.C. in its first game following this summer’s disappointing Gold Cup. The 2-1 victory gave Jurgen Klinsman’s team a boost of confidence and offered valuable clues as to how the team is shaping up for next month’s crucial playoff against Mexico.

Here are a few things we learned about the American on Friday night.

Speed and Zardes made the difference

The Yanks were outpossessed 59% to 41% but still managed to win thanks in large part to an edge in speed on the wings. DeAndre Yedlin and Gyasi Zardes gave Peru fits when they had space in front of them.

Zardes in particular covered a ton of ground and made some impressive runs. In the first half, he gave the U.S. attack a pulse during a 30-minute stretch in which Peru dominated. In the second half Zardes made the decisive play, connecting with Jozy Altidore on a pass that led to the game-winning goal.

Yedlin’s role wasn’t as well defined but he also was dangerous on multiple occasions. In the second half, Peru lost its edge and gradually the game opened up for the Americans.

Klinsmann was quick to point out how much Zardes has brought to the team and that he has a big future on the squad.

“He's an endless worker,” Klinsmann said. “He's giving everything he has. He has very surprising moments in his game. He has his speed, he has his dribbling, he can take people on. He gives us a new element that we didn't have at the World Cup last year because with that with that speed and with that flank play and because of his tremendous work load in going back, defending, and helping out - we suddenly have another kind of option there that we can play out. It was something we missed at the World Cup: speed.”

“Gyasi's game is becoming a lot more consistent and obviously Bruce Arena is doing a fantastic job with him at the Galaxy. He really grew him.” Klinsmann added. “Am I comfortable with him against Mexico? Absolutely.”

“I think Gyasi has been one of the best players for the national team since he's come here,” Altidore said. “He's been terrific. His effort is fantastic. He's always dangerous. Whenever he gets the ball he always has his defender on his back foot. I think he doesn't get the credit he deserves. I think he's been spectacular and he's always improving.

“We weren't particularly sharp today but with him and DeAndre getting down the flanks with speed, it creates havoc. It opens things up.”

Klinsmann brought seven central defenders into this camp—a sign that he is looking for two players to claim the two starting spots. John Brooks had a strong game against Peru. Omar Gonzalez faltered in his 45 minutes, and a shot that deflected off him game Peru its first-half lead. Matt Besler came in and made some strong plays in the second half to preserve the win. Ventura Alvarado also looked solid after a particularly poor Gold Cup.

With Geoff Cameron, Michael Orozco, and Tim Ream all in the mix, questions abound.

“That's why I made three switches at half time,” Klinsmann said. “I wanted to get them all time on the field. I want them to prove a point independent of the result at that moment. I think all of them did fine. It's good. There is good energy there. Their support in the locker room, even in competition for that one spot, is very respectful. But it is very dynamic as well.

“We feel good about our defenders whether on the flank or in the middle, that they can get the job done.”

Odds are that Brooks will be start against Mexico but who will be his partner? Nothing is clear at the moment. The game against Brazil might offer more clues.

Tim Ream didn't give a highlight reel performance against Peru but he still had a very strong game. The Fulham defender is primarily a central defender but due to a number of American injuries he played left back against Peru—a position he has played in the past with his former club, Bolton.

After a few uneasy early moments, Ream shut down everything that came his way. He won the bulk of his individual battles and came up with multiple key interceptions. Left back has historically been a difficult position for the Yanks, but the 27-year-old St. Louis native thrived there Friday night.

“I think Tim Ream played a very, very solid game,” Klinsmann said. “He won many, many 1v1 situations. He played clearly and simple out of the back. It's what we asked him to do and it's what he's known for.”

DaMarcus Beasley's international career is winding down and if Klinsmann wants to play Fabian Johnson in the midfield or at right back, the team could be in good hands with Ream at left back. Seeing Ream raise his game in a position of need might have been one of the most important lessons learned in the friendly.

In the 67th minute Brad Guzan made a series of incredible saves. It began with a looping free kick that Carlos Zambrono headed toward goal, forcing Guzan to make a diving stop. The rebound fell straight to Renato Tapia and Guzan needed to stop two shots from very close range—and he did.

At the time the score was 1-1 and Guzan save’s prevented Peru from moving back into the lead and reclaiming the momentum.

“It came from a wide free kick and I saw it kind of late as it came over our first defender,” Guzan said of the play. “We were happy to keep the first one out and obviously I was able to keep the second one out and it got stuck under my leg. You're just doing anything you can to keep the ball out of the back of the net.”

Plenty of ink has been spilled over the U.S. goalkeeping situation now that former No. 1 Tim Howard is back in the mix. Perhaps the competition is going to make both players better. During Howard's 14-month hiatus Guzan was the undisputed first-choice backstop. Now he has a star pushing him for playing time.

Guzan certainly did not lose any ground against Peru.

It's hard to imagine a striker who goes through more ups and downs than Altidore. He can disappear for months and then look like a world beater for an equal stretch of time. The New Jersey native bristles at the mention of his confidence but the truth is that it is important for many strikers—including Altidore.

Altidore scored two goals against Peru but that disguised the fact that he struggled throughout the match. Yes, he scored in the 59th minute, but that game off his own poorly taken penalty. In the first half he had a breakaway opportunity thanks to an errant Pervian backpass but a poor first touch prevented the 25-year-old from rounding the keeper and walking the ball into an empty net.

Still there were moments of brilliance. His move to draw the penalty was very creative and ambitious. He did what Klinsmann always asks his players to do: express themselves and not be afraid to make mistakes. As a result, good things happened.

“I felt much better on the field, obviously, coming off the injury,” Altidore said. “I feel better and I'm just happy we won the game and to be part of a winning effort.”

The second goal was a simple tap-in but Altidore deserves creding for being in the right position.

“Obviously we're very pleased with Jozy—coming back and scoring two goals,” Klinsmann said. “It's the best medicine for every striker.”

Klinsmann knows how important an in-form Altidore can be for his team. He named Atlidore captain for the game—a sure sign that Klinsmann still believes in Altidore despite his struggles.