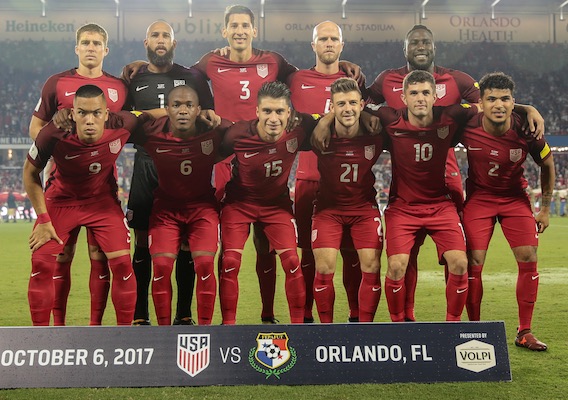 5 Thoughts on the Decisive U.S. Win Over Panama

After a pair of worrisome performances in September, the U.S. men's national team put it all together Friday night in Orlando, Fla., cruising to a 4-0 win over Panama and moving a step closer to the World Cup.
BY Brian Sciaretta Posted
October 07, 2017
10:00 AM

IT WAS A DREAM PERFORMANCE from the United States.

With everything on the line and the pressure enormous, the U.S. took Panama out of the game early while avoiding serious injuries and suspensions. Key players raised their games and played with pride to put the Yanks on the brink of punching a ticket to the 2018 World Cup in Russia.

U.S. Bruce Arena got exactly what he was looking for in the 4-0 win and with another good outing on Tuesday he can begin focusing on the World Cup. Here are five thoughts on the win.

Christian Pulisic has produced some very impressive performances for the United States so far—especially in the win over Honduras in March followed by the away draw against Panama days later. He was also instrumental in the home win over Trinidad & Tobago in June.

Last night's showing was better than all of those because of the must-win nature of the contest and Pulisic silenced talk of defeate early with two outstanding individual plays. First with the goal from a tight angle and second with the inch-perfect pass that led to Jozy Altidore's first goal.

What was particularly interesting is that Arena shifted Pulisic from the wing and to the No. 10 role, which is probably more natural for him. He ended up getting a ton of touches and was impossible to defend. It will be hard to see him playing any other role with the U.S. going forward.

Fresh off a profile on 60 Minutes, the hype and spotlight was was on Pulisic and he delivered—beyond impressive.

The Yanks faced a must-win situation and Arena decided go with a very offensive-minded approach.

The coach started two attack-first fullbacks—Jorge Villafana and DeAndre Yedlin—and two wingers in Paul Arriola and Darlington Nagbe who prefer to press forward rather than defend. Arena moved Pulisic into the No. 10 spot and deployed a two-forward set with Jozy Altidore and Bobby Wood. Defensively, that put a lot of pressure on Michael Bradley in the defensive midfield role and the two central defenders, Matt Besler and Omar Gonzalez.

The roster featured quite a few players past the age of 30 but Arena's starting lineup in this crucial game was certainly not conservative. Of the five attacking players positioned in front of Bradley, only one, Altidore, has played in a World Cup.

Panama head coach Hernán Darío Gómez must not have done his homework. If he looked closely at the United States' September qualifiers and its performances in the Gold Cup group stages he would have seen an easy way to neutralize the Americans: the bunker-counter approach. Costa Rica perfected this tactic on September 1 as it played five in the back, absorbed the U.S. attack, and hit effectively on the counterattack. It frustrated the United States and it gave the Ticos a valuable three points that will surely send it to Russia.

Seemingly ignoring all of this, Gomez went into Friday seeking an open game on the road in Orlando, Fla.—even with the U.S. team opting for a lineup that was defensively limited in the midfield.

Arena was more than happy to have an open game knowing his talent would prevail in the end. And sure enough, Panama was blown off the field early. It had its chances but the U.S. had far more. And with Pulisic, Arriola, Altidore, and Wood all having space to operate, it was never a contest.

The United States was far better but Panama’s was doomed before the opening kickoff.

One big takeaway from the game is the potential of a Yedlin-Arriola combination on the right side of the field. For most of the past five years, the United States national team has been slow. Arriola and Yedlin are both fleet of foot, and provide a weapon U.S. supporters are not used to seeing.

Their speed could really help open up the game and create more space other players. Pulisic was helped out on Friday because he had more space to operate and part of that was due to players like Arriola and Yedlin making effective runs.

Arriola is still a little raw and his finishing was lacking but he still had a nice assist on Wood’s final goal. He is clearly worth a look because playing with Yedlin in back of him will create a lot of chances moving forward.

Wood and Altidore shine together

The Wood-Altidore pairing might be intriguing on paper but the two have not always performed well together. Case in point: last month's Costa Rica game.

But Friday night was a different story. Perhaps they were helped by having Pulisic in the No. 10 role. Perhaps Panama's defense created more openings. Regardless, it worked and both Altidore and Wood were in fine form despite both missing some great chances.

What was particularly interesting is that both Altidore and Wood showed great movement, with and without the ball. Wood drew a penalty and was dangerous in open spaces. Altidore was effective holding the ball up to help get the offensive involved. He also showed that he is the team’s best passing forward by a large margin.

Altidore and Wood showed a good understanding of how to play with each other and fit together within a system. They will have better days ahead with their finishing but, hopefully for Arena, these two can continue to partner well against Trinidad & Tobago—and eventually in Russia.