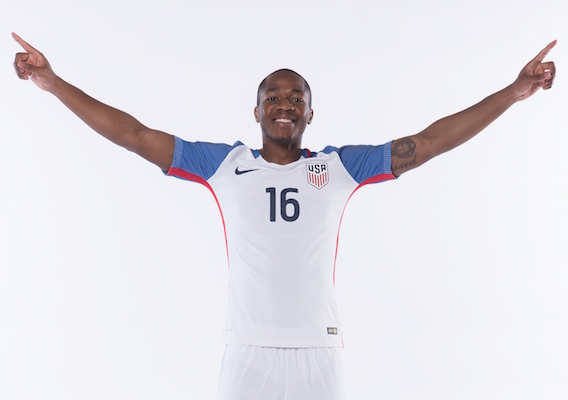 JURGEN KLINSMANN announced his 23-player roster for the Copa America Centenario Saturday and it featured many familiar faces. This will be the biggest tournament to be hosted in the United States since 1994, and it will also offer the federation a chance to start moving in the right direction after a bad stretch dating back to the 2014 World Cup.

Yes, it's a big deal. Here are my five thoughts on the roster.

1. The core remains the same

Perhaps the biggest standout item of this roster is that the core of this team remains the same. Fifteen of the 23 players selected were on the 2014 World Cup, and if Jozy Altidore and Aron Johannsson were healthy, it would probably be 17. A similar collection of players made the roster for the CONCACAF Cup last October.

Klinsmann said this past week that many young players have not played well enough to overtake the veterans. That’s alarming but it raises important questions. If the U.S qualifies for the 2018 World Cup in Russia, is it the team going to have a similar look to 2014? If yes, how will it be any better? If no, when will the next group gain experience to take over?

After Klinsmann's failure to qualify for the 2017 Confederations Cup, the only non-CONCACAF games that remain before the World Cup are friendlies. So...?

2. Morris out, Orozco In

Whenever Klinsmann names a roster there are always a few names that take people by surprise. This was no exception but let’s just focus in on two decisions.

Jordan Morris not making the team was puzzling for two reasons. The first is that the star rookie has been playing well recently after a slow start. Last weekend his four-game scoring streak was snapped but he remains the favorite in the rookie of the year race. Second, with Altidore suffering a pulled hamstring, it appeared as if Morris would play a big role on this team.

The reasons for his exclusions are twofold. First, Chris Wondolowski is playing well despite his advanced age. But Morris and Wondolowski are different types of players so there are perhaps other factors at play. It’s important to note Gyasi Zardes is listed on the roster as a forward. The Galaxy attacker has played more for the national team than any player since January 2015 but has mostly been used as a winger. If he plays as a forward than maybe that is even more of a reason why Morris was left off.

The inclusion of Michael Orozco is also surprising despite that Klinsmann has always seemed to like him. The Tijuana defender played just three Liga Mx games for his club in 2016 and he had a poor performance for the U.S. against Guatemala in March.

The reason for his inclusion is probably due to versatility. Orozco, 30, has been used at both right back and central defense for the Yanks. With a lack of clarity at each position, Klinsmann likely sees Orozco as an asset who can fill in at either role.

3. Chandler or Johnson at left back?

The left back position continues to be a nightmare for the U.S. national team, and Klinsmann’s two options are Fabian Johnson and Timothy Chandler. Neither plays left back for their clubs, so that position is a real concern as the Copa America Centenario gets underway.

Johnson is a solid left back but he’s also the team’s best overall player and has performed very well for Borussia Monchengladbach as an attacking midfielder. If Johnson plays as a left back this summer, Klinsmann won’t be getting optimal use out of his best player and instead will be using him to fill holes.

Chandler is almost exclusively a right back at the club level and he only plays on the left side under Klinsmann. After being benched most of this year at Eintracht Frankfurt, Chandler started to see the field toward the end of the season and has played in seven of Eintracht’s last nine games—with mixed performances. So far his career for the U.S. team has been mostly underwhelming (not to mention lengthy absences due to his unwillingness to commit to the team) but he still manages to make his way onto the squad.

Left back has always been a problem for this team and, based on this roster, it will continue to be.

4. Nagbe is an intriguing selection

At the 2014 World Cup, the U.S. was badly out-possessed in every game outside of one 25-minute stretch against Portugal. At the 2015 Gold Cup, the U.S. either lost or was badly outshot by every opponent except for a Cuban team riddled with defections. Those problems continued into the CONCACAF Cup loss to Mexico last October.

How does Klinsmann intend to solve this problem. If the same core wasn’t the answer last year, what has changed? The midfield is a huge reason for the possession disadvantage but Nagbe is a player who has a skillset really designed for possession. He’s a technical player who does not make a lot of mistakes.

Of course he can’t fix the problem entirely but can he be a step in the right direction? The Copa America Centenario can offer some clues—if he sees the field. That might be tricky on a team crowded with central midfielders.

Klinsmann was quick to bring Nagbe into the fold last fall as soon as he received his American citizenship. This will now be his first major international test and it will be interesting to see what he brings to the team, and if the coach lets him play.

5. What role with Pulisic play?

There is plenty of excitement over Christian Pulisic, 17, making this team. The Pennsylvania native played in nine Bundesliga matches for Borussia Dortmund and scored twice this season. He is a prized prospect but will he get a chance to shine in this tournament?

It's hard to say but he appears ready to be able to help the team right now. As an attacking player who predominantly plays on the left side, he plays a position few Americans do (especially if Fabian Johnson is going to be a fullback). The safe bet is that Pulisic is one of the top attacking options off the bench but it would not be surprising if he makes the starting lineup.

Please share your take on the roster in the Comments section below.