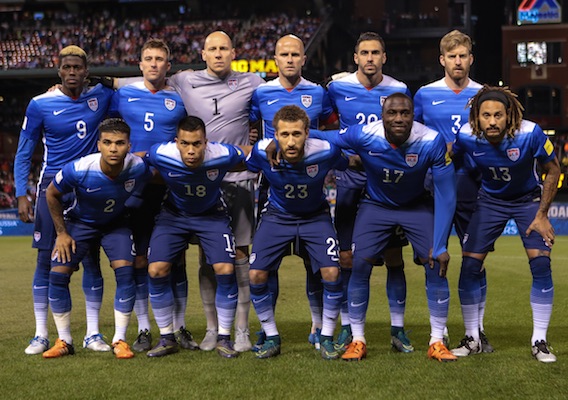 You never want to read too much into a 6-1 win against an overmatched opponent, but the U.S. national team's performance provided some fodder for discussion as World Cup qualifying began.
BY Brian Sciaretta Posted
November 14, 2015
7:10 AM

THE UNITED STATES men's national team began its 2018 World Cup qualifying campaign with an expected rout of St. Vincent and the Grenadines to end a four-game losing skid against CONCACAF opponents at home.

The games, of course, will only get harder from here. Here are four takeaways from the game.

St. Vincent was a bad team, with many players having full-time jobs outside of soccer. No matter how many problems the U.S. team may have, it is always going to dominate this type of opponent.

That doesn’t mean the match wasn’t without benefit, though. Despite trailing right off the bat after a series of mistakes, the Americans did what they had to do, and there’s certainly value to just winning a game and scoring goals—even against this level of competition. After a ragged four-month stretch, the U.S. desperately needed a cakewalk. It got that Friday night in St. Louis.

Trinidad & Tobago on the road is going to be a challenging game, but for now the United States has a little bit of wind in its sails.

2. Johnson is better in midfield

Questions have always surrounded Fabian Johnson and how he fits into the U.S. setup. He has Champions League-caliber talent, as he’s showing with Borussia Monchengladbach, but his versatility has been a hindrance at times: Primarily, Johnson’s been used to plug up holes, as opposed to being put into a position that truly brings out the best in him.

Left back has been the Achilles’ heel for the U.S. men's national team for years, and for a while Johnson filled that void before shifting across the field to right back. He’s always said playing in the midfield is what best suits him, though, and regardless of the opposition Johnson looked comfortable and happy in St. Louis. He was at ease and he knew what to do.

Now, finding a way to put him in that spot game in and game out without decimating the backline should be a huge priority for Jurgen Klinsmann.

3. Bradley-Jones combo on its last legs

Ever since Klinsmann was hired, Jermaine Jones and Michael Bradley have been the first-choice central midfield pairing, but that may not last much longer. Jones came up injured Friday and appears to be questionable for Tuesday. At 34, he faces significant questions surrounding his future. Will he return to MLS or move back abroad? How much longer is he going to be able to compete at the international level?

Jones and Bradley are both major talents, but they don't always work well together in part because both tend to roam the field as they see fit. With Jones in decline, however, perhaps having a pure defensive midfielder behind Bradley would allow him to be more effective in a free-range role. At the World Cup, Kyle Beckerman was able to play the No. 6 role behind the two, but if a 4-4-2 formation is preferred—as it appears it is—then a change might be for the best.

If the United States is indeed going to stick with a 4-4-2, it will be interesting to see who the first-choice forwards will be. Aron Johannsson has been injured frequently, and Clint Dempsey is potentially in the doghouse after being made a healthy scratch for these matches. Chris Wondolowski and Alan Gordon are fading, while Jordan Morris and Rubio Rubin are probably, for now at least, on the opposite end of the spectrum.

Fortunately, the Jozy Altidore-Bobby Wood pairing seems promising. Wood has played extremely well for the United States this year, and his numbers for Union Berlin are also decent, as he has five goals on the year so far. Altidore, for his part, has been very inconsistent, but if he finds the right strike partner it might bring out the best in him. (Charlie Davies and Altidored formed a lethal partnership in 2009.)

It’s way too early to proclaim Wood and Altidore as the future strike tandem, of course. One thing’s for sure, though: Altidore may frustrate U.S. fans with his inconsistency, but when he is at his best, he can be a force.