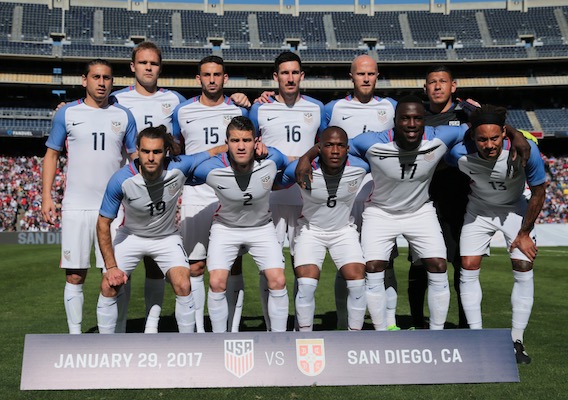 3 Thoughts: What Arena Should Take Away from Tie

Brian Sciaretta sat through the Serbia match a second time with an eye on how the U.S. can learn from what worked, and what didn't, to make the most of the Jamaica game on Friday.
BY Brian Sciaretta Posted
January 30, 2017
9:20 AM

THE UNITED STATES men's national team’s scoreless draw against Serbia was quite dull and there were several reasons why the team did not generate as many opportunities as it should have. The good news, however, is that the lessons to be learned were clear.

After watching the game for a second time, here is where things went wrong and where the team can make adjustments ahead of this week’s Jamaica friendly.

Lack of speed hurt the U.S.

When looking at Bruce Arena’s starting lineup against Serbia, the lack of speed was immediately a concern: Among the starters, only Darlington Nagbe had decent pace. Yes, the starters included some decent passers but it was hard to envision the U.S. team being able to made devastating runs in the open field or make explosive plays inside the final third to score.

These concerns were well founded. The counterattacks occasionally had promise but fell apart closer to goal. The U.S. team had the majority of the possession but it was not able to make any dangerous plays to breakdown the disciplined Serbian defense.

Later in the game, the U.S. became more dangerous. Substitutes Chris Pontius and Benny Feilhaber—both fairly speedy—clearly helped as both were able to be part of good scoring chances despite playing limited minutes. Jordan Morris, the fastest player on the roster, also helped open the game up.

In the end, it was too little too late. It does make you wonder how the game would have played out had many of the substitutes started the game.

Over the years and across many different coaches, the United States national team (including the youth national teams too) plays better in a 4-4-2 formation. In general, American forwards play better with a partner and there are few natural quality wingers.

It is therefore no surprise that this January camp roster also begs for a 4-4-2. Looking at the starting lineup, the outside midfielders Darlington Nagbe and Alejandro Bedoya are versatile players but better centrally. The wings are secondary positions for both.

But perhaps the biggest problem is that Jozy Altidore tends to thrive when he has another forward in a 4-4-2. In a 4-3-3 or a similar 4-2-3-1, he is stranded. When Altidore is isolated, he tends to drift back into the midfield to get more touches and he did this occasionally against Serbia. The result is that there was typically very little happening inside the box.

The good news is that with Bobby Wood almost certainly a starter for the U.S. in World Cup qualifiers, Altidore will have a strike partner. But Altidore is a player that thrives or falls with his confidence. These friendlies are meaningless but there is value in putting Altidore in a situation where he is likely to succeed and building up confidence heading toward March.

Fullbacks failed to get involved

The fullback positions were weak heading into this camp. Yes, there are two solid options—at least on paper—in Europe on the right side with Timothy Chandler and DeAndre Yedlin. But if Arena wants to move Fabian Johnson into his best position in the midfield, left back is a ghost town.

The Graham Zusi-to-right-back experiment is essentially him fighting to be either the third or even fourth or fifth (behind Eric Lichaj or Jonathan Spector) option on that side. So it is not really a high-stakes gamble.

The left back is an option audition with a world of opportunity for either Greg Garza, Jorge Villafana—or DaMarcus Beasley whenever either of them sees the field.

In this game, it was mostly a mess on either side with very little offense coming from the fullback position. With the team already slow in the front six, the lack of offense from the fullbacks only compounded the problem.

Zusi was not bad at right back from a defensive standpoint. He did not get beaten. As a natural attacking midfielder with solid crossing ability, his inability to be a consistent threat offensively was costly. His best opportunity came shortly into the second half when he took a pass from Sebastian Lletget and played a nice pass to Sacha Kljestan at the top of the box who almost connected with Altidore on a final dangerous pass.

But Garza did not deliver at left back. It is unrealistic to expect much from Garza because he has missed most of the past two years in Liga Mx due to injuries. Now on loan with Atlanta United it is expected that he should play more. But the rust was there on Sunday. He should have been whistled for a penalty in the first half, and his offensive abilities yielded very little.

Villafana was a noticeable upgrade later in the second half and would be a huge boost to the U.S. team right now if he can get back on the field with Santos Laguna – where he has not played in Liga Mx since September.

Lessons to be learned?

Friendlies are not about winning or losing but rather a chance to learn more about players, formations, and tactics. What should Arena do against Jamaica this week to improve the team’s performance and build momentum for the March qualifiers?

For starterns, move to a 4-4-2 and start Altidore with either Morris or Juan Agudelo.

Central midfield has options. Benny Feilhaber could be very useful in the more advanced role of a diamond formation (with Kljestan out against Jamaica). Alejandro Bedoya would be far better there too as opposed to out wide. Michael Bradley was pretty good in a deeper position although it would be interesting to see how Dax McCarty could do there.

Against Jamaica, starting Nagbe and Pontius out wide is probably the best given how each performed on Sunday. Finally, in the back, Zusi will get tested against a Jamaican team always loaded with pace. It will be a much better indication of how he can handle that aspect of the position.

At left back, Villafana has a lot to gain against Jamaica. Arena singled him out in a postgame interview. A solid outing could put him on the 23 player roster for March.