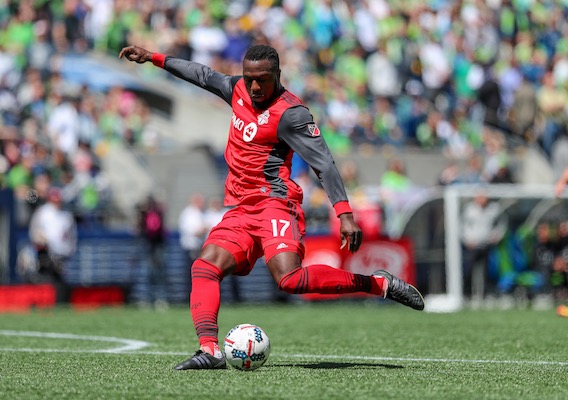 Michael Bradley and Jozy Altidore may not be popular with U.S. soccer fans right now, but they are the toast of the town in Toronto. Here are Brian's thoughts on Toronto FC's 1-0 win over Columbus Crew.
BY Brian Sciaretta Posted
November 30, 2017
6:00 AM

IN ONE OF THE BETTER-PLAYED games of the 2017 playoffs, Toronto FC used a 60th-minute goal from Jozy Altidore to down sentimental favorites Columbus Crew SC and advance to MLS Cup, which it will host on December 9.

It was a game with no shortage of compelling storylines. Toronto FC had the best regular season ever for an MLS team and was led by embattled U.S. internationals Michael Bradley and Jozy Altidore along with top passer Victor Vazquez and Sebastian Giovinco, one of the best players the league has ever seen. Meanwhile Columbus Crew SC is one of the league’s founding teams but is being threatened by a wildly unpopular relocation to Austin, Texas.

Unlike the scoreless first leg, this game was entertaining and saw both teams have golden chances. In the first half Toronto was awarded a penalty but Columbus goalkeeper Zack Steffen continued his run as one of the best players in the playoffs and came up with the save on Vazquez.

Toward the end of the half, Columbus winger Justin Meram couldn’t control a dangerous pass into the box to get off a powerful shot on Toronto’s Alex Bono.

Toronto moved ahead at the one-hour mark when a long goal kick from Bono resulted in a combination effort from Altidore and Giovinco before arriving at the feet of Vazquez, who sent Altidore into the box for a close, tight-angle shot which beat Steffen.

Over the final 30 minutes Columbus pressed forward in search of an away goal which would have given it the series win. In the 84th minute a cross from Harrison Afful nearly connected at close range with Ola Kamara. Minutes later, Meram also missed from close range for the visitors' final chance of the night.

After four minutes of stoppage time, the whistle sounded and Toronto was named the Eastern Conference Champions for the second straight season. After winning the Supporter’s Shield as the team with the best overall record, Toronto will host the winner of the Seattle Sounders-Houston Dynamo series on December 9th in MLS Cup. After falling to Seattle in last year’s final, Toronto will likely face the Sounders again looking for not only revengebut also to become the first-ever Canadian champion of MLS.

Here are my three thoughts on the game.

Altidore thrives north of the border

Throughout the playoffs, American fans voiced their displeasure with the World Cup qualifying failure by directing a chorus of boos toward Michael Bradley and Jozy Altidore every time they touched the ball.

The story is quite a bit different in Canada where Altidore and Bradley remain extremely popular with fans in Toronto. Canadian fans used to not qualifying for the World Cup and generally have separating international soccer form club soccer.

Atlidore’s goal tonight was well taken and it took some skill from several players. Giovinco had a nice backheel and Vazquez played a very nice final pass. But Altidore made a nice pass in the build-up and followed it with a smart run and a well-placed finish.

It is impossible to know what the international future holds for Bradley and Altidore as the United States has no coach, no technical director, and no meaningful games for the foreseeable future. But for now, Canada is happy to have both in what has been a completely dominant season for Toronto FC which is looking to become not only MLS Cup winners, but also field a strong team for the CONCACAF Champions league quarterfinal in February.

While Columbus is now eliminated, on an individual level goalkeeper Zack Steffen will be one of the big winners from this playoffs. The young goalkeeper from Pennsylvania added to his growing resume that should set the table for a big 2018.

Steffen, 22, was a terrific goalkeeper in college at Maryland. In 2015, he was perhaps the best goalkeeper at the entire U-20 World Cup where he helped get the United States to the quarterfinals. Now in 2017 he was one of the best players in the MLS playoffs.

After Tim Howard, Brad Guzan, and Nick Rimando were the national team’s goalkeepers for most of the past decade, a new group is badly needed. And there are candidates in Bill Hamid, Ethan Horvath, and Jesse Gonzalez. It should come as no surprise if Steffen gets a long look in January and eventually emerges at the number one, no matter who the coach will be. He has that level of talent.

Pressure on Giovinco heading into final

Sebastian Giovinco, 30, made a huge splash when he arrived in Toronto in 2015. He had played with the Italian national team and Juventus and arrived in MLS in his prime. To his credit, he completely bought into his new team and has been perhaps the best player in league history. Over the past three seasons, Giovinco has played exciting and intense soccer. He has scored some amazing goals and when he wasn’t scoring goals he was setting them up for others.

This Toronto team might be the most talented in league history. Altidore and Bradley have done well for the team. The addition of Victor Vazquez has been immense as his 16 assists bolstered the team’s midfield to help feed the attack.

But for Giovinco, this is about legacy. Look at the best players in the history of this league: Landon Donovan, David Beckham, Eddie Pope, etc. They have all won the championship. Despite a small frame, Giovinco has been an enormous figure for this league and Toronto.

Giovinco has played very well this playoffs and tonight he was huge in the build-up to the goal. But all that does is make MLS Cup that much more important for him and his legacy.