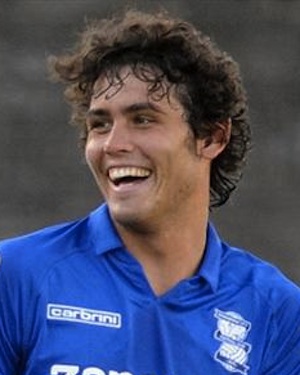 Packwood and USA U20s prepare for Mexico at 2010 Dallas Cup

Highlights from the crowd from Packwood’s league debut

If it weren’t for a devastating knee injury it’s likely Will Packwood would already be better known to American Soccer fans. Fortunately, all the injury seems to have done is delayed the introduction.

The Massachusetts native joined Birmingham City’s academy at age 14 and worked his way up the youth and reserve ranks, before debuting with the first team in a League Cup match at age 19 in August of 2012.

With the pace to play right back, where he started in the League Cup, and the size (six-foot-three) to play center back, Packwood seemed poised for a huge breakthrough, playing five times for Birmingham’s first team in league play. But in an FA Cup match early in 2013 he landed awkwardly after a routine aerial challenge and shattered his left leg in two places.

Packwood had been expected to anchor the U.S. backline at the 2013 U-20 World Cup but his injury obviously scuppered those plans. He returned from injury faster than expected and in Oct. of 2013 he was loaned out to fourth division side Bristol Rovers to get match fitness.

He was recalled after eight games with Bristol and played 12 games for Birmingham the rest of the season. That put him on Jurgen Klinslann’s radar but wasn’t enough to get him a chance to audition for the team that went to Brazil. He has since become a key cog for the U.S. U23 side that will try and qualify for the 2014 Olympics with the senior team a matter of when and not if. – BROOKE TUNSTALL