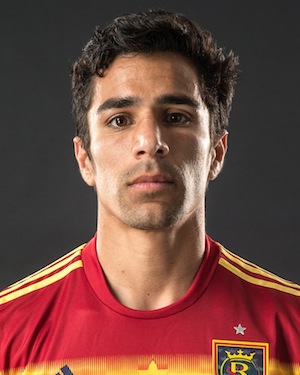 Tony Beltran likes to go about his business quietly. In fact, he told the Salt Lake Tribune the one word he'd use to describe himself is "reserved." But Beltran's play—smart, solid defending on the right flank with an increased comfort in the attack—speaks for itself. And more people are beginning to notice.

Beltran grew up in Southern California but spent a year at St. John's University before returning to his home state and playing two seasons at UCLA. He jumped to MLS in 2008, going to Real Salt Lake as the third overall pick. He started 10 games the first season, 21 the next, and has since become a steady presence in the Real Salt Lake backline - by the end of the 2014 season he'd appeared in over 160 MLS games. His coaches at RSL rarely need to worry about the right side of the field because Beltran is out on an island, holding down the fort without much fanfare.

Ironically, the splashiest thing Beltran has been involved with wasn't even his doing. Cosmopolitan magazine picked him as one of MLS's hottest players. "When it came out, I didn't want to go to practice the next day," he said.

Beltran played for the U.S. U-20 side at the 2007 World Cup and the U-23 squad at the 2008 Toulon Tournament and in 2013 his steady play in MLS was rewarded with his first cap in a friendly against Canada and a spot on the Gold Cup roster where he earned his second cap when he started against Cuba—NOAH DAVIS