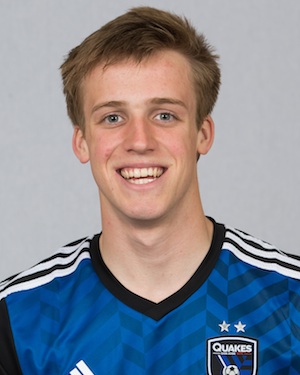 Is he a striker? Is he a wing? Can he play centrally behind the forwards? The questions with Thompson, who debuted for San Jose Earthquakes at age 18 after a season at Indiana University, are many. But they ignore the most obvious answer: What he is, is a soccer player. The son of former NASL and indoor star Gregg Thompson, who was capped a dozen times by the U.S. and played in the 1984 Olympics, Thompson seems destined to follow in his dad’s footsteps, regardless of what position he plays. He has the athleticism inherited from a former pro, the vision from being well-coached from an early age, and the technical skill honed in backyard games with his brothers, both of whom play for prominent Division I college programs. The one thing his family couldn’t provide him was professional experience but the Earthquakes are taking care of that. After missing the first part of his rookie season in 2014 recovering from an injury, Thompson became a regular in the Quakes first XI and the club appears willing to endure his learning curve while his performance catches up to his potential. If that happens, he’ll likely end up with more caps than his old man, regardless of position.
—BROOKE TUNSTALL

Quakes Invest in Tommy Thompson
For the Thompson Clan, Soccer Is a Family Affair