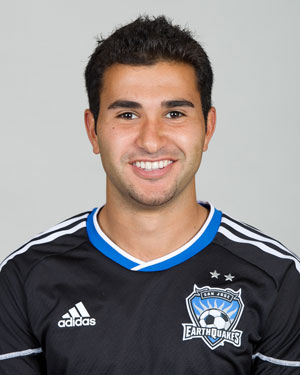 USMNT or Iran, A Player with Options

The fortunes of Steven Beitashour, a solid right back with a penchant for making overlapping runs and whipping in vicious crosses, are heading in the same direction as those of his San Jose Earthquakes club: up. In less than a year, the 25-year-old defender jumped from little-known afterthought on one of MLS's worst teams to national team prospect.

Beitashour spent five years at San Diego State, then made seven starts for the struggling Earthquakes during his rookie season in 2010. His fortunes improved the next year as the defender found his footing and led his club in assists with seven. But Beitashour really improved in 2012. The defender showed his ability to shut down attackers as well as get forward and deliver pinpoint balls to Chris Wondolowski and Steven Lenhart.

Beitashour's parents are Iranian, and the country’s national team coach, Carlos Queiroz, reportedly showed interest in calling him up in July 2012, but the defender said he wanted to keep his options open. "I think the main thing I try to focus on is just playing well every day [and] don't try to look too far into the future, because you can't tell what's going to go on," he told IranSportsPress.com at the time.

A surprising call from the United States came soon after, and Beitashour found himself on a plane to Mexico. He didn't figure in the American's historic victory over El Tri, but he could receive more chances in the future. While the right back position is loaded with talent like Steve Cherundolo and Fabian Johnson, the Quakes backliner inserted himself into the conversation. That's impressive for a young man was not part of the national team conversation in 2011. He's a long way from San Diego State, but he's not done yet.—NOAH DAVIS

Klinsmann on Beitashour:
"Steven has built his case over the last couple of months, and talking with Frank Yallop and getting his information was the most important step.... We are pleased to bring him in. He will be welcomed here and he’ll see it is a very positive and comfortable environment where he can settle in with no problems. We are curious to see him in the couple training sessions that we have. It’s not much because we have two and a half days to prepare for a game, but obviously I’d love to see him over a longer period of time. It will be curious to get his first impression." (August 2012)