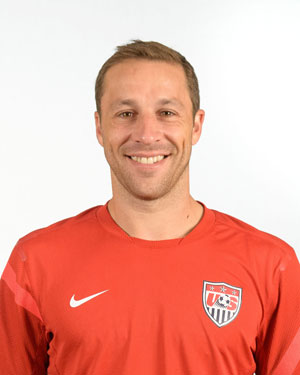 Perhaps it's his laid-back California attitude or his small stature, but Steve Cherundolo rarely gets the credit he deserves. For well over a decade the defender has flown up and down the right flank, shutting down opposing wingers, then overlapping his midfielders and getting into the attack. Cherundolo is quiet and reserved, but extremely well respected for his dedication to the Stars and Stripes. While he's at the tail end of a fantastic career, he will be instrumental in helping the U.S. qualify for the 2014 World Cup, tutoring the next generation, and fighting them off for spots in the starting 11.

Cherundolo earned his first cap before the turn of the century, playing 90 minutes in a 2-2 draw with Jamaica on September 8, 1999. Injuries, ranging from serious (2000) to niggling, robbed him of playing time and the 2002 World Cup, but he established himself as a regular on the American squad by 2004 and started all three matches during the 2006 World Cup. Perhaps even more impressive than his national team work, however, is his performance for the Hannover 96 club he joined in 1999. He's been with the same club for his entire career, and almost a decade and a half later, the captain and "Mayor of Hannover" is nearing his 350th appearance.

Dolo enters his fourth World Cup qualifying campaign as the presumed starting right back. He'll be pushed by players such as Eric Lichaj (and potentially Timothy Chandler), but Klinsmann will no doubt turn to his Bundesliga stalwart to help calm a backline that has been shaky in the middle. Cherundolo doesn't have the quickness he once did, but he's smart, positions himself well, and never stops fighting. The real question: Can he earn his 100th cap before it's all over? (Bet yes.)—NOAH DAVIS

Klinsmann on Cherundolo:
"No, I don’t see [Cherundolo or Carlos Bocanegra] slowing down. We do fitness testing every six months at the latest. We would see that curve going downhill, and it’s not going downhill. It’s actually improving because we give them information on what to do in all the different elements of the game." (June 2012)