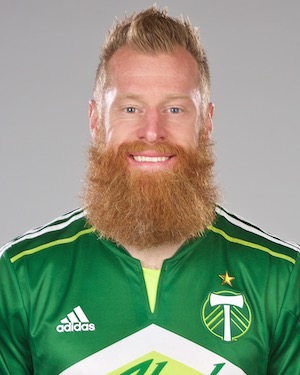 When Borchers finished four years at the University of Denver but didn't get drafted, his career looked to be over before it began. But a stint on the Colorado Rapids' development roster turned into a starting gig for the full club midway through the 2003 season. His lunch-pail work ethic won admirers both in the clubhouse and in the stands—the defender has his own fan group, Borchers Brew Crew—which led to steady work for the Rapids and a call to the U.S. national team in 2005.

The fearless defender, who is willing to mix it up with the biggest bodies on the pitch, next tried his luck in Europe, signing with Norway's Odd Grenland in 2006. He played 46 games over three seasons in the Norwegian Premier League but was released in 2008 and returned to the U.S. Real Salt Lake claimed the Arizona native and he picked up his MLS career right where he left off. Borchers started 29 games in 2008 and 30 games in 2009, 2010, and 2011, earning an MLS Best XI nod in 2010. He also found his way back to the national team when Bob Bradley brought Borchers to a 2010 friendly in South Africa.

Borchers had off-season knee surgery before the 2012 MLS season but has since recovered and continues to perform at a high level. With ongoing questions surrounding the American backline, there's a chance Jurgen Klinsmann could call upon the steady defender in the near future.

It's been quite a journey and it's not quite over for the 31-year-old. "I know soccer can’t last forever, but I am going to keep playing as long as I enjoy the game," he said way back in 2005. When it’s finally time to hang up his cleats, Borchers, who has both a bachelor’s and master’s degree in accounting, will no doubt find a way to stay in the black.—NOAH DAVIS