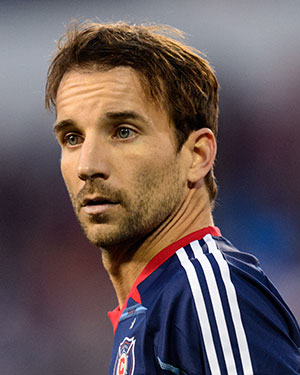 Mike Magee was always a serviceable pro—alternating between forward and attacking midfield—but his career exploded in 2011 after he refocused and rededicated himself to the game. Magee's vision, technique, and awareness serve him well on the left side—where he once played for the Los Angeles Galaxy and is now with the Chicago Fire

Magee started out in Bradenton, playing in the U-17 World Cup in 2001. Two years later, he played in the U-20 World Cup and joined the Bob Bradley–coached MetroStars, playing in every game except one and scoring seven goals. A call to the national team came in 2004, although he did not earn a cap. Magee enjoyed another strong season in 2005, but injuries robbed him of effectiveness from 2006 to 2008.

A move to the Los Angeles Galaxy came in the winter of 2009, and Magee scored two goals during the four-game playoff run that saw his new club lose in the MLS Cup final. The midfielder again missed time due to injury in 2010, but returned in impressive form the following season. He became a fan favorite—eventually inspiring a Twitter feed called @MikeMageeFacts—and learned to love playing with David Beckham. "If you have half a brain, you realize that when David gets the ball and has a tenth of a second to look up or even to get a cross in, you really need to get in front of the ball because he's basically going to bank it off you. The sooner I figured that out, I started scoring more goals," he told USA Today. The result: 10 goals in all competitions in 2011.

Magee also stepped into goal for a little more than a half after injuries to Donovan Ricketts and Josh Saunders. "When I first went in there, I thought it was cool to play goalie," he told The New York Times. "At halftime we kind of regrouped, but no one said anything to me. All of a sudden I realized I’m the goalie, and at that point I was scared. All of a sudden it hit me and the adrenaline from the first half wore off. I had to go out there for another 45 minutes." He posted a clean sheet.

After several years of clutch playoff play, Magee had an epic 2013 regular season. He scored six goals the first 10 games of the season for the Galaxy then was traded to his hometown Chicago Fire in the deal that brought Robbie Rogers to L.A. and back on the shores of Lake Michigan Magee scored 15 goals for the Fire in 22 games was named MLS MVP.

Poorly times injuries and sickness cost Magee a shot at turning his MVP campaign into a shot at making the 2014 World Cup team. He was called into the annual January camp in 2014 but missed the friendly with South Korea because of food poisoning. He then battled a series of hip injuries that limited him to 17 games in 2014 and ultimately required season-ending surgery. —NOAH DAVIS