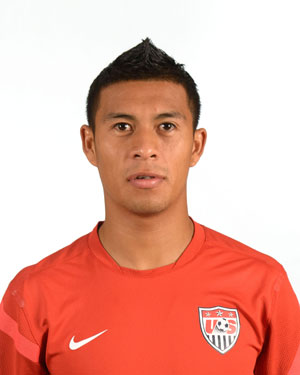 On every team there’s always a role for utility players and if Michael Orozco has shown one thing in his career, it’s versatility. He started at left back for the U.S. in the 2008 Olympics and split most of his club and U.S. senior team career between right back and central defense.

Orozco isn’t blessed with great size nor amazing speed or ball-skill but he’s smart, not shy in the tackle and reads the game well, the kind of things that endear him to a coaching staff.

A native of Southern California, Orozco left home as a teenager for his parents’ native Mexico and debuted with Liga MX club San Luis in 2006 at age 20. That made him one of the more-experienced players in the U.S. U-23 pool for the 2008 Olympic cycle and he was one of the top U.S. players in Olympic qualifying though his experience in the Games themselves was marred by an infamous early red-card that cost the U.S. dearly in a must-win game with Nigeria.

His experiences with the senior team have been more positive, albeit in limited caps. He scored the game-winning goal in a friendly against Mexico in 2012 to give the U.S. its first win, ever, in Estadio Azteca in Mexico City and he started three games, and scored two goals as the U.S. won the 2013 Gold Cup.

Orozco, who transferred to Puebla in 2013, will likely never be a star for the U.S. but that doesn’t mean there isn’t a consistent role for him for the 2018 World Cup cycle as that guy on the team who can fill in anywhere across the back line. - BROOKE TUNSTALL