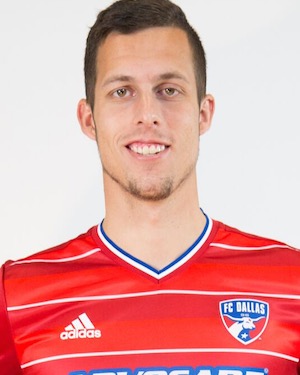 At times Matt Hedges must wonder just what he has to do to get some recognition from the powers that be in American soccer. In college, he had three strong seasons for mid-major Butler University but despite ideal center back size at six-foot-four and twice being named Horizon League Defender of the Year and being an All-American as a junior, neither youth national team call-ups nor a Generation Adidas offer ever came his way. So to get seen by more scouts he transferred to the higher-profile University of North Carolina for his senior season and promptly led the Tar Heels to an NCAA title in 2011. That got him another All-America nod and while the youth national team never called, it was enough for FC Dallas to make Hedges the 11th pick of the 2012 draft. Because of his combination of size, athleticism, and ability to read the game, Hedges started 27 games as a rookie and 33 more in 2013. He remains a lynchpin for FC Dallas' backline and now wears the captain's armband, and yet the national team still hasn’t come calling. Don't be surprised if that changes sooner rather than later.—BROOKE TUNSTALL