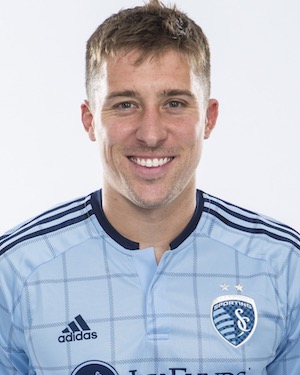 Matt Besler plays for the hometown club he grew up watching. It's the type of story that feels like it should be a movie, but Sporting Kansas City's smart, solid center back isn't done writing the script. In August 2012, he received his first call to the national team for the match in Mexico and two years later he'd won a pair of trophies with his hometown club, been named MLS Defender of the Year, played so well for the U.S. in the World Cup that he received multiple offers from European clubs, and turned them down when he accepted a lucrative designated player contract that kept him in Kansas City.

After graduating from Blue Valley West High School in Overland Park, Kansas, Besler attended Notre Dame University. He finished school in three-and-a-half years, earning a degree in psychology/pre-medicine along with a host of soccer awards, including All-American and Academic All-American selections.

Kansas City drafted Besler with the eighth pick of the 2009 MLS SuperDraft, and he started 26 games his rookie season. He benefitted greatly from playing alongside veteran Jimmy Conrad, and his technique steadily improved. In 2011 Besler started 32 games and helped Sporting KC make it to the postseason. Another strong year in 2012, after which he was named his first MLS Best XI, led to Besler’s first-ever national team call-up—against Mexico in Estadio Azteca.

He quickly formed a strong partnership with Omar Gonzalez in central defense and became a lock for the starting lineup, culminating in Brazil, where he fought a balky hamstring and used his smarts and anticipation to put out multiple fires and earn the contract offers from Europe that he ultimately turned down. What's next in Besler's Hollywood script is TBA but he'll be in his physical prime for the 2018 World Cup cycle so odds are there are scenes still left to be made.—BROOKE TUNSTALL

Klinsmann on Besler:
"I’m not worried about having a couple younger players or even new players like Matt Besler or Steven Beitashour. They’ve proven their qualities over a long time in MLS and they’re doing extremely well. It’s a huge opportunity for those players that are coming to Mexico City now and also for us as a whole team to prove ourselves against a good side.” (August 2012)