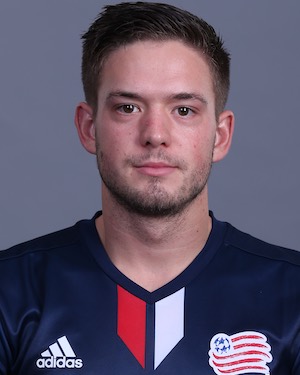 It’s likely Kelyn Rowe has scored some goals from close range, it’s just hard to remember many of them. The Washington state-native isn’t a prolific goal-scorer – he averaged about five goals a year his first three MLS seasons – but the ones he scores are usually such memorable blasts from 20, 25 and even 30 yards that it seems like he scores more.

“I don’t think anyone in MLS shoots better from distance than Kelyn,” Revolution coach Jay Heaps told American Soccer Now. “Plenty of players have a leg as strong as his. But Kelyn is able to put himself into positions where he can use his leg strength and he has the awareness and confidence to take those shots.”

There’s more to Rowe’s game than long-range blasts. Taken third overall by the Revs in 2012 after two seasons at UCLA, Rowe has earned the nicknamed “Mini Dempsey” because like Clint Dempsey, himself drafted by the Revolution and an occasional scorer of the spectacular goal, Rowe is such a versatile attacker. He can play as a withdrawn striker but just as often he’s been used on the wing and he’s also been deployed as a central midfielder behind the forwards.

Through three MLS seasons he was actually more productive as a set-up man, finishing with more assists each year than goals. What Rowe needs to take his game to the next level is consistency as a player with his skills should likely have more to show for his talents. If that happens then some long looks from the U.S. national team seem inevitable, though it could be the idea of adding those long-range blasts to the U.S. arsenal may be enough to get him some attention from the national team. BROOKE TUNSTALL