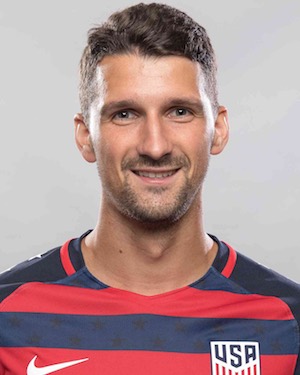 Eric Lichaj fits the role of outside back to a tee. He's quick up and down the flanks, adept at crossing, and strong as a one-on-one defender—traits that helped him win a starting spot in the English Premier League and appear for the United States national team at 21. Lichaj also uses his impressively long throw-in as a potent weapon.

Lichaj, who spent time in Bradenton and with the American youth sides, was at the University of North Carolina for a year, although he didn't play a regular-season game after breaking his foot in preseason. That spring, he jumped to Aston Villa and hasn't regretted the decision. "I knew I was going to be playing soccer [professionally], and it just depended on the timing," he said before the 2011 Gold Cup. "When I look back now, it was the right timing to do that. It was right for me." Lichaj needed loan spells to Lincoln City, Leyton Orient, and Leeds United before breaking into the Villa starting lineup for parts of 2012. After making 23 appearances for Villa in 2012-13, he signed with English Championship side Nottingham Forest the following summer and has settled in as a starter at fullback, usually but not always, at righ back.

Lichaj's fortunes on the U.S. team, however, seem to be heading in a different direction. Bob Bradley capped him against Colombia in 2010 and Lichaj became the coach's first-choice left back during the later stages of the 2011 Gold Cup. Jurgen Klinsmann, on the other hand, others and didn't give Lichaj his first camp invite till November of 2013 and his only caps were late appearances against Scotland and Austria. Lichai apparently didn't show enough to warrant a look in 2014 before Klinsmann picked the team that went to Brazil but Lichai will be 29 at the 2018 World Cup so the book isn't closed on his national team career, but he's clearly slipping down the depth chart despite solid performances in England. If he's going to be a big part of this World Cup cycle, he'll need to get more game time and impress his German boss.—NOAH DAVIS