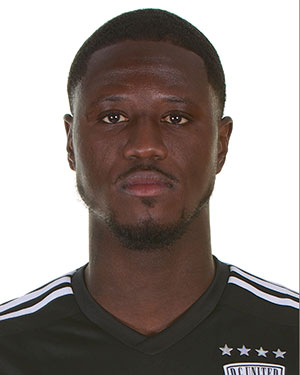 Eddie Johnson experienced tremendous success early in his soccer career, and it nearly destroyed him. The phenom, who scored 23 goals in 25 games for the United States U-17 team and netted seven strikes in his first six World Cup qualifiers, developed a bad attitude and a serious sense of entitlement. A humbling four-year experience in Europe seemed to transform Johnson for the better. But a recent, acrimony-filled departure from Seattle raised new questions about his attitude.

Johnson dominated as a teenager, then won the Golden Boot at the 2003 FIFA World Youth Championships. Although he struggled to find playing time in the early stages of his career with the Dallas Burn, he started to improve in 2004 and 2005. Johnson also earned his first senior team cap in 2004, scoring against El Salvador and netting a hat trick four days later. Johnson's fortunes continued to improve as he made two appearances during the 2006 World Cup. He took time to find his footing after a trade to the Kansas City Wizards but netted 12 goals in 2007 and signed with Fulham in January 2008.

Then, disaster. He never caught on with the Cottagers, eventually going on loan to Cardiff City, Aris, and Preston North End. Johnson lost his confidence, scoring just seven goals in four years (and none for Fulham). After an aborted attempt to sign with Puebla in late 2011, Johnson returned to MLS when the Mexican club deemed him out of shape.

Montreal took him with its top allocation spot, but quickly traded the forward to Seattle for Mike Fucito and Lamar Neagle. The Sounders showed confidence in Johnson, and it paid dividends. "As a player, you want to be at an organization that believes in you," Johnson told Goal.com. "They gave up two really good, young, up-and-coming players that I think are going to play major roles in the Montreal organization. You can relax more when you know the team has given up so much to acquire you."

Johnson’s return to MLS paid off at first, scoring 23 goals his first two seasons in the Emerald City. He played well; perhaps not at the world-beating level of his early career, but he is scoring goals and, for the most part, working hard. The "working hard" part is something of a revelation. "I believe the best is yet to come from me," he said. "I'm a lot older, wiser. I've been around the game for 11 years now, and I know what it takes to perform at the highest level." His return to form hasn't gone unnoticed. He won the league's 2012 MLS Comeback Player of the Year.


Johnson's form with the Sounders jump-started his national team career and after not suiting up for his country in 2011 the next two years he scored 7 goals in 17 caps.

After the 2013 season Johnson sought a hefty pay-raise that required designated player status and the Sounders had no DP slots and shipped him to D.C. United, which was willing to meet his salary demands. He got off to a slow start with United that seemed to cost him a shot at going to Brazil in 2014 as he wasn't invited to the pre-tournament camp. —NOAH DAVIS

Eddie Johnson Returns to Major League Soccer (Goal.com)
Eddie Johnson Shows a Different Side as He Resurrects His Career with Seattle Sounders (SportingNews.com)