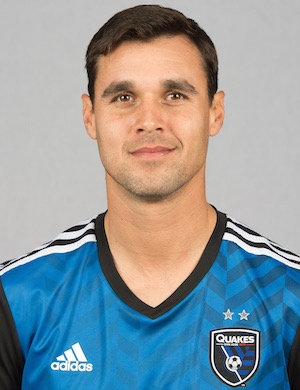 Every chapter of Chris Wondolowski’s career seems more improbable than the next.

Lightly recruited out of high school he ends up at a Division II school, Chico State, where he shows just enough to get drafted late by his hometown San Jose Earthquakes, who took him 99th overall in 2005. He plays sparingly for five seasons - 39 games total, most of which came with Houston after the Earthquakes relocated – then was sent back to his hometown when San Jose got a second shot at MLS.

In 2010 a switch was flicked and Wondolowski abruptly went from seldom-playing reserve to elite goal-scorer. He tallied 18 times that year, 16 the next season, tied a league record with 27 in 2012 then scored 11 more in 2013. Along the way he won an MLS MVP award, two Golden Boots, three-times was named Best XI and signed a lucrative a designated player contract.

All that production caught the attention of the U.S. national team coaches, first Bob Bradley and then Jurgen Klinsmann, debuting in 2011 a week shy of his 28th birthday. Initially he seemed out of his depth at the international level, failing to make much of an impact in his first nine caps. But his MLS form earned him a spot on the 2013 Gold Cup roster and in his next 10 games with the U.S. he scored nine goals including a hat trick against Belize, brace against Cuba and South Korea and a strike against Mexico in a 2014 friendly that convinced Klinsmann to bring the late-bloomer from the D-II school to the World Cup in Brazil.

Alas, there was no Hollywood style ending for Wondolowski on the world’s biggest stage despite being given a golden chance to be the hero. With the U.S. trailing Belgium 2-1 in the dying moments of overtime in their second round match, Wondolowski had a ball fall to his feet six yards from goal. It wasn’t a gimmee, as Belgian goalkeeper Thibaut Courtois was charging off his line, but it was a shot Wondolwski has buried countless times in MLS only this time he sent his one-timer wide, sealing the U.S. fate.

Sadly, for a player who has had an improbably successful career as Wondolowski has, this will likely be what most fans remember him for. - BROOKE TUNSTALL

Klinsmann on Wondolowski:
"First and foremost is he scores goals. He is hungry for goals, no matter if it is in training or in an MLS game. Every place. This is fun to watch. He doesn't stop running. He doesn't stop fighting. He helps his teammates. He's a pure giver. He's tremendously fit. He's sharp. He's experienced. He understands better what it takes to be an international striker. He's hungry for information. He's like a sponge." (May 2012)

"He knows what he's still missing and what the others provide." (August 2012)