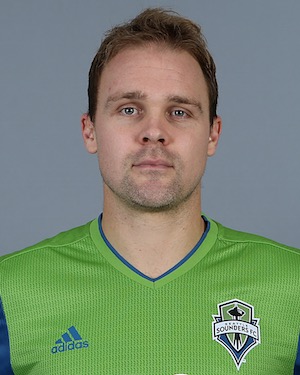 Chad Marshall has had a successful career—spending time on multiple youth national teams and earning 11 caps for the U.S. senior squad—but there will be a little bit of "what if?" for the towering, talented defender. Concussions limited Marshall's playing time during what should have been his strongest seasons.

Marshall grew up in Riverside, California, spending time in Bradenton and earning the distinction of being named the top recruit of his high school class. The 6-foot-4 defender started during multiple tournaments as a U-17 and U-20 player, and spent two years at Stanford before jumping to MLS in 2004. The Columbus Crew drafted him with the 2nd overall pick, and he spent a decade with the Ohio side, helping lead it to an MLS Cup title and a trio of Supporters' Shields. Marshall's strongest seasons came in 2008 and 2009 when he earned MLS Defender of the Year honors and appeared on the league's Best XI lists.

On the international level, Marshall made one appearance (and scored his only goal) in 2005 but didn't figure again until the 2009 CONCACAF Gold Cup. He played well in that competition, earning a spot on the All-Tournament team, but didn't make the World Cup roster a year later. He was one of the last men cut from the team.

Marshall has struggled with concussions, missing significant time during multiple seasons. It's a problem he thinks about frequently. "Every time I get hit in the head or kicked in the face, my mind immediately goes there. It would be tough to hear someone say I had to stop. But I'm someone who wants to go on and have a family and be able to play with my children without having to stop and go sit down," Marshall said in 2011. "If I was to get another (concussion) and was told, 'Look, you need to walk away,' well, I've been fortunate to play this game for eight years. I can say I got some accolades and an [MLS Cup] ring. If that was what had to happen for my best interests, I could do that."

As Marshall's time in Columbus wound down some wondered if he'd lost his love for the game but in 2014 he was traded to Seattle and later that season he became a father and he was suddenly playing with a renewed intensity. He helped the Sounders win the 2014 U.S. Open Cup and was along the top defenders in MLS. —NOAH DAVIS