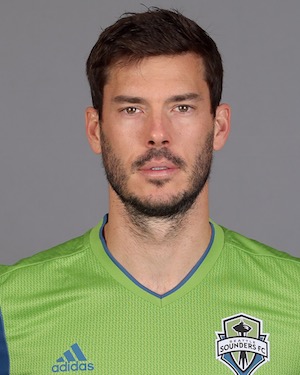 There are better players in American soccer than Brad Evans, but few have gotten more out of their ability than he has.

After four solid but unspectacular seasons at UC Irvine that were highlighted by making the U.S. roster for the 2005 U-20 World Cup, Evans was drafted by the Columbus Crew 15th overall in 2007 and converted him from a forward to a midfielder.

Evans played only for games as a rookie but in 2008 he started 21 regular season matches and four more in the playoffs as the Crew won the Supporters’ Shield/MLS Cup double. After that season coach Sigi Schmid left Columbus for the Seattle Sounders and took Evans with him and he’s been a consistent starter, either as a holding or wide midfielder in most of his time in the Emerald City.

He’s not especially physically gifted and he’s rarely flashy and his stats – just over 20 goals and 20 assists through 2013 – aren’t too auspicious but Evans grinds and finds a way to stay in the lineup and make a difference. Since becoming a regular he’s never missed the playoffs and besides the trophies he’s won in Ohio he’s helped the Sounders win four U.S. Open Cup titles.

The consistency and winning caught Jurgen Klinsmann’s attention in 2013 who played a hunch and shifted Evans to right back. He started nine games that year, including 5 in World Cup qualifying, adding two assists and scored a crucial game-winner late against Jamaica to help the U.S. get a rare road win in qualifying. Evans was one of the 30 players invited to Klinsmann’s pre-World Cup camp in 2014 but did not go to Brazil, after, ironically losing the right back spot to Sounders teammate DeAndre Yedlin. – BROOKE TUNSTALL