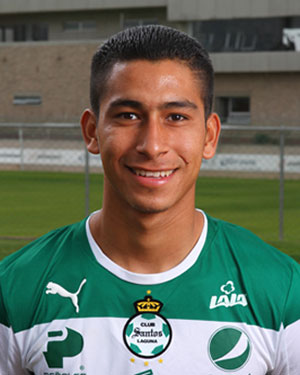 Benji Joya is on loan with the Chicago Fire, but before that he made a bright start in Liga MX.He settled in to the Santos midfield for his first league start. There aren’t too many greats who have worn No. 53, but the high squad number Joya sports shows just how quickly he has risen from helping his mom with her janitorial service to playing in Liga MX matches. In late July 2012, he would occasionally training with the first team. By early October, he was a regular substitute getting occasional starts. Joya is capable of playing centrally but typical employed by Santos on the wing. While he’s right-footed, he enjoys cutting in to his left, something that was on display when he scored his first goal for Santos in a friendly against the Chicago Fire. The midfielder decided to skip playing college soccer in order to play with the Guerreros academy. The decision has paid off so far, with the transition from SoCal to Torreón made easier thanks to some encouragement from fellow American Herculez Gomez. Gomez has been impressed with the youngster’s play thus far. “What I love most about this kid is that he is the prototypical Chicano player,” he said of Joya to MLSSoccer.com. “He’s got a very American mentality that says, ‘I’ve got to work and put my head down, I want to do this for my family.’ I can relate to that, and I think if he keeps that same mental approach, he’s going to be fine.” For now, Joya’s national team development will largely be overseen by Tab Ramos and the U-20 staff, who are hoping he’ll be key in the 2013 U-20 World Cup. Yet, with Joya’s skills, don’t rule out a quick transition to the senior squad similar to the one he underwent with his club.—JON ARNOLD