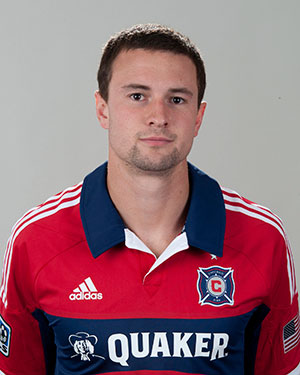 Berry for Rookie of the Year

Austin Berry wasn’t the most highly touted player in the 2012 MLS SuperDraft, but the Chicago Fire were eager to snag the centerback with the 9th pick.

Coach Frank Klopas knew Berry, who had previously played for the Fire's PDL team, would be a contributor. But even the manager wasn’t expecting to need his new man so soon. After Corey Gibbs and others on the back line went down with injury, Berry met and exceeded expectations. By how much did he exceed them? Berry came out of nowhere to become the near consensus pick for 2012 MLS Rookie of the Year, boosted in part by a clever campaign that put his face on a cereal box. It wasn’t just marketing that earned Berry accolades. He started every game, making a splash in his MLS debut on May 4th with a goal. The consistency he’s shown in the top division make it easy to forget Berry’s a guy who was manning the back for Louisville a year earlier. “Just having the guys around me and the coaching staff as well, they’ve made the transition easy,” Berry told the Chicago Sun-Times. “We’ve been putting in a lot of work, especially lately, on working on the back four, and as time has progressed we’ve become more comfortable with each other.” The defender seems to have a knack for finding where the ball is and putting it where he wants it to be—usually out of danger, but he can also help out on offense. In addition to the debut goal, Berry added two more during the year including a game winner against Toronto that kickstarted a strong August for Chicago. With the United States national team defense aging, Berry could get his shot to wear the crest sooner rather than later. If he takes to the international game as quickly as he did to the domestic one, U.S. fans will be very pleased.—JON ARNOLD