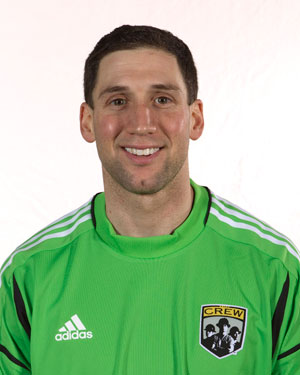 Save of the Week Nominees: Week 12

Andy Gruenebaum waited patiently for more than six years before getting a chance to shine. When he finally did, the 6-foot-1 former Kentucky Wildcat who grew up idolizing New Jersey Devils goalkeeper Martain Brodeur thrived in net for the Columbus Crew.

That patience serves Gruenebaum well in net. He knows when to stay back and when to charge, waiting for the perfect moment. His quick reflexes, developed at a young age in a roller-hockey cage, and hyper-athletic frame help him save shot after shot for a Crew club that frequently struggles to score.

Gruenebaum, who's been with the team since they drafted him third in the 2006 Supplemental Draft, almost didn't get a chance. He played sparingly until starting goalie Will Hesmer went down in the 2012 preseason. The Kansas-born Gruenebaum assumed the No. 1 shirt by default and impressed MLS in start after start.

But despite showing the league and the wider world what a solid goalkeeper he is, Gruenebaum is far from satisfied. “I don’t feel like I’ve done anything yet, and I am nowhere near where I want to be,” he told the Columbus Dispatch in 2012. “And there is more to life than soccer.”

The netminder, who turns 30 in December 2012, is still solidly down the deep United States goalkeeper depth chart, but he knows he has plenty of time to make a move. Good things come to those who wait.—NOAH DAVIS