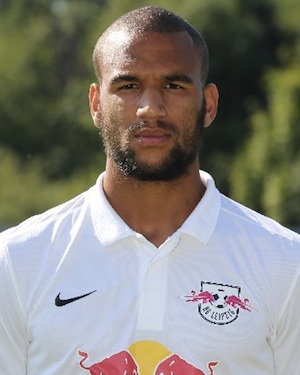 Of all the German-Americans who have played for the U.S. national team the past few years, none of have outwardly embraced their American-ness more than Terrence Boyd.

The striker, who joined Bundesliga 2 outfit Red Bull Leipzig in the summer of 2014 after two productive seasons for Rapid Vienna in Austria, has a U.S. flag and a bald eagle among his ink collection, devours American television on Netflix and has a passion for the New York Giants (why the Giants, we don’t know?) and he’s used frequent trips stateside to play for the U.S. to reconnect with long-lost relatives of his father, a former serviceman whom he was separated from most of his life.

On the field, Boyd struggled to breakthrough for the U.S. after debuting as a 21-year old in a friendly win over Italy in 2012. Stuck on the target-forward depth chart behind Jozy Altidore, Boyd’s early stint with the national team saw him get consistent call-ups but often seen him relegated to late sub minutes or seen him fail to take the field at all.

Boyd was among the final seven players cut from the squad Jurgen Klinsmann took to Brazil for the World Cup, a decision that quickly proved dubious when Altidore went down minutes into the first game and the U.S. had no back-up target forward on the roster.

But Boyd has several things on his side for the 2018 World Cup cycle, starting with his size (six-foot-two) and athleticism, youth, and nose for the goal. Combine that with his love of his country and it’s likely a matter of time before his productivity matches his passion. – BROOKE TUNSTALL

Klinsmann on Boyd:
"He's a young player who is on his way up, but he doesn't care who he's playing against. In training, he goes full speed against [Oguchi Onyewu]. He doesn't back up. It gives us more options." (June 2012)

"Terrence is one of our promising talents that we’re trying to develop. He’s one of these guys that should be in London 2012 but unfortunately is not. It makes it more difficult for the Brek Sheas and [Juan] Agudelos and Joe Coronas of the world, so we have to kind of bring them along and help them wherever we can and give them their space to show what they can do. I think Terrence’s work rate was outstanding and his hunger for finishing off-chances is tremendous. It’s something that we really love to see and that’s why we keep working with him and giving him those opportunities. It’s really nice to see what Terrence has achieved within the last couple of months." (June 2012)