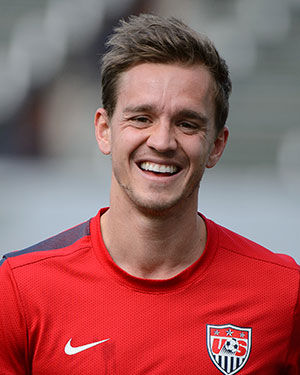 Stu Holden, Bolton Wanderers and USMNT, on Isolation, His Hair, and His Girlfriend

Stuart Holden may be the unluckiest man in American soccer. When healthy, he's one of the most creative, talented midfielders in the pool, but he can't seem to stay on the field. Part of this stems from his competitive, hard-tackling mentality, but many of the injuries have come because of sheer chance.

The trend started early in his career. Holden, who was born in Scotland, signed a contract with Sunderland in 2005 after two years at Clemson University. But two separate injuries—one suffered after being attacked outside a bar and the other to his ankle—kept him out of action during the six-month stint. He returned to the United States and signed with the Houston Dynamo where he figured in 13 matches during the MLS Cup–winning campaign in 2006. He saw more time in 2007 and 2008, playing out wide at first and later in the middle. Holden also played well for the American Olympic team in Beijing, a showing that he parlayed into a January call-up. Fate intervened, however, and he missed the camp with a hip injury.

Holden recovered and showed his true talent during 2009. He was a star in Major League Soccer and made the All-Tournament Team at the Gold Cup. (The U.S. brought the B team to the championship.) Bolton came calling after the season and he joined the club in the winter of 2010. He was flourishing for club and country, right up until Nigel de Jong broke his leg with a tackle in March. Holden recovered in time to make the 2010 World Cup team but played sparingly.

The 2010-2011 season started off well, with Holden making the Guardian's team of the first half. "It's nice to get some recognition, but in some ways I still feel I am only just starting out," he told the paper. Then, in March, it happened again. A Jonny Evans tackle cut Holden's knee. The ACL injury required surgery and Holden missed six months. He returned too soon and had to undergo another surgery from which he's still recovering.

Despite the setbacks, the outgoing Holden remains optimistic. "If I change the way I play, I'm not the player I am," he told ESPN.com in 2012. "I'm a tackler, that's my game. The one thing I want to be more careful of is not going into completely stupid tackles, just be a bit smarter." If (when) Holden gets back on the field for a long stint, finds a little luck, and lives up to the promise, watch out world: The guy can play.

Holden could find himself anywhere on Klinsmann’s depth chart following the Gold Cup. If he shows he’s at or near his pre-injury level—he was of course famously voted the EPL player of the season by Guardian readers at Christmas in 2010—Holden could be on his way to a spot in the starting XI. But if he struggles to regain his past form, he’ll have a long way to go to put himself in the conversation for the spot in center midfield alongside Michael Bradley. It will be up to Holden to show that he deserves a chance to beat out Geoff Cameron and Jermaine Jones in the buildup to Brazil.