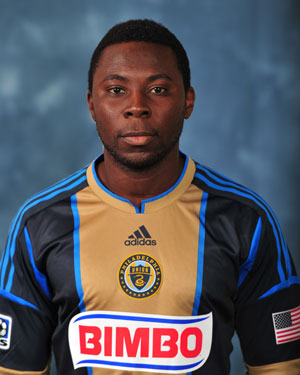 Freddy Adu had the richest contract in MLS at 13. He was, by some accounts, washed up at 18. He endured five failures in Europe by the time he turned 21. His stints with the various U.S. teams—including the U.S. senior team—have been all over the map. And now, still in his early 20s, he finds himself outside the U.S. national team picture after struggling to get playing time for the Philadelphia Union and failing to crack the lineup at Brazilian side Bahia.

Through it all—the press obsession, the public scrutiny, the second-tier European leagues—Adu has remained one of the most creative and charismatic men in American soccer. The expectations placed on him as a teenager were completely unfair, and the sense of entitlement (not to mention the outlandish paychecks) went to his head for a time, but he has come out on the other side. Although it's safe to say that the attacking player has not yet become all that he hoped as a professional, he has learned to take it all in stride. "I’ve been a pro for, like, eight years and I’m 22. I’m just happy that I’m young enough to be through some rough times and great times," he told Goal.com in 2012. "I’m blessed that I’m young and I’m able to learn from that and put it all together."

Adu's future role within the U.S. national team is a topic of great debate among American supporters. Some followers say his creativity and pace is a must-have; others argue he's too small and was never that good to begin with. Jurgen Klinsmann wants players who are regulars for their club sides, so becoming a regular in MLS is vital. And yet there is no denying that Adu can do things with a soccer ball that few others can accomplish. (See: 2011 Gold Cup)

Adu, while still young, is growing up. He took on a leadership role with the U-23 squad. Although the 2012 incarnation of that team failed to qualify for the World Cup, Adu served as an effective captain who played well during qualifying.

"It’s a different role. I’ve always been one of the youngest guys on the team," he said to U.S. Soccer at the time. "But now I’m one of the older guys, one of the more experienced guys, and I have to be more of a leader. The guys are looking up to me, asking me questions and looking at me to step up." The experience he gained over the past decade is coming in to play. The question: Can the skills match up? (Who would have thought that would be the question?)—NOAH DAVIS