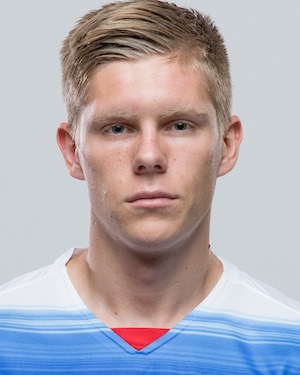 Aron Johannsson, AZ Alkmaar's sleek forward, is an unlikely United States national team player. Although he was born in Mobile, Alabama, he spent his childhood in Iceland and used to represent that country on the U-21 level. But a string of impressive performances in 2012, when at age 22 he led the Danish league in scoring at AG Aarhus, sparked the hope that he would change his allegiance (or that Jurgen Klinsmann would call the young man). And he did. Johannsson played in the August 2013 friendly against Bosnia and Herzegovina, and must have made a positive impression because Klinsmann added the striker to his roster for the September 2013 World Cup qualifiers versus Costa Rica and Mexico and has kept calling him back amid skyrocketing expectations.

Those expectations only grew as "Aron Bacon" transferred to AZ Alkmaar in the Netherlands, where he briefly paired with Jozy Altidore and devoured the Dutch league with a level not seen by an American striker since, well, Altidore the year before. His performances for both club and country have been electrifying and lent credence to the thought that Johannsson would play a big role in Brazil. However, after replacing Altidore in the first half against Ghana Johnansson never took the field again in the tournament and it was later revealed that he had been shelved because of an ankle injury, that required surgery and cost him the first part of the 2014 Dutch season.