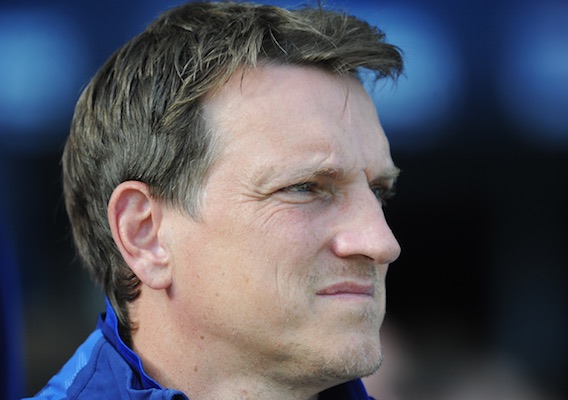 Yanks Lose to Honduras as Olympic Hopes Start to Fade

Andi Herzog's U.S. U-23 team could have booked a ticket to the 2016 Olympics with a win against Honduras. Instead, it will have to win back-to-back matches to qualify for the Rio games.
BY John Godfrey Posted
October 10, 2015
5:00 PM

ANDI HERZOG DIDN'T MAKE IT to the final whistle in the United States' 2-0 loss to Honduras today. The U-23 coach and Jurgen Klinsmann lieutenant engaged in some sort of inappropriate encounter with match officials and was subsequently escorted off the field.

Yes, it was one of those matches—a CONCACAF Special.

With the loss, Honduras booked its place in the 2016 Rio Olympics. The U.S. U-23s must now defeat the loser of tonight's Mexico-Canada semifinal and then defeat Colombia in a do-or-die match on a date to be determined.

Rio Tinto Stadium looked empty—possibly because most U.S. and Mexico fans are focused on tonight's CONCACAF Cup—and players slipped early and often on a pitch that looked good but apparently was not.

Regardless of the field condtions, Honduras fully deserved the victory. The Central American side played with more confidence and technical precision, and bottled up the heretofore lethal U.S. attack.

In the opening stanza the Americans continued with a strategy it used throughout the Olympic qualifying tournament: midfielders lifted long passes forward in the hope that the speedy Morris or Kiesewetter could latch on to a long ball and get behind the Honduran defense. The ball seemed to sail in the mountain air, however, and nothing came of these attempts from start to finish.

The Yanks dodged a bullet in the 12th minute after Carter-Vickers slipped and fell in the U.S. half and gave possession away. This led to a swift Honduran counterattack, which Matt Polster quashed with a "professional" foul that earned him a yellow card.

Polster could have earned a second yellow less than two minutes later when his high kick nicked Honduran Oscar Salas on the arm, but the Panamanian referee Jafeth Perea let it slide.

Neither team came close to scoring in the opening 20 minutes, but Honduras jumped out ahead in the 23rd minute on a seemingly innocuous sequence.

The play started with Kevin Alvarez crossing to Alberth Elis at the top of the American penalty area, in an area situated between the U.S. midfield and backline. Elis chested the ball down, danced around Carter-Vickers, and then placed a beautiful shot past Horvath on the far post.

Alvarez torched U.S. left back Dillon Serna several more times in the first half, but those chances didn't amount to anything.

The Americans crafted their first meaningful attack four minutes before the break when Emerson Hyndman intercepted a pass on the right flank which ultimately led to a Kiesewetter shot from a sharp angle. The ball was on frame just inside the near post but Honduran keeper Luis Lopez batted the low, hard shot away.

During first-half stoppage time, with less than 20 seconds to go in the half, Carter-Vickers gave the ball away once again and gifted Honduras a chance to double its lead. Fortunately for the 17-year-old, his teammates rushed to his aid and the teams went into the break with the U.S. trailing 1-0.

Just after the interval Carter-Vickers gave the ball away yet again, also in a dangerous spot, but his teammates once again bailed him out.

From this point on, the Americans began to play with increased desperation, creating a series of legitimate chances.

In the 51st minute, substitute Gboly Ariyibi received a deflected ball at the top of the Honduran penalty area and had a clear shot on goal. He struck it well but the ball flew high and wide of its target.

Less than a minute later Wil Trapp took possession of the ball in the U.S. half and made an impressive 50-yard run down the heart of the pitch. His shot, too, flew wide of the target.

The Yanks maintained the pressure, earning a series of penalty kicks and half-chances. In the 64th minute Ariyibi earned a corner and Carter-Vickers nearly redeemed himself on the ensuing play. Unfortunately for him, Lopez reached out with his left arm and pushed the defender's well-placed header away.

Despite the aggressive American attack, or perhaps because of it, Honduras doubled its lead in the 75th minute after pushing down the right side and setting up Elis for his second tally of the game—a beautifully floated shot from 12 yards out that sailed over Horvath's outstretched hand and into the back of the goal.

And then, with the cameras focused on the on-field action, something odd happened on the sidelines. Both Herzog and Honduras coach Carlos Taboria were led off the field after some sort of altercation. The two men shook hands before walking up the tunnel, but Herzog looked humiliated in the face of his team's loss and his apparent misbehavior.

With assistant coaches now in charge, the Yanks appeared to pull one back around the 85th minute when Morris pounced on a deflection and slammed it into the back of the night. The linesman flagged the Stanford University forward for offside, however, and while the call seemed questionable, it stood.

From that moment on, the Americans appeared to accept their fate. They must now win back-to-back matches if they want to play in next summer's Olympics.