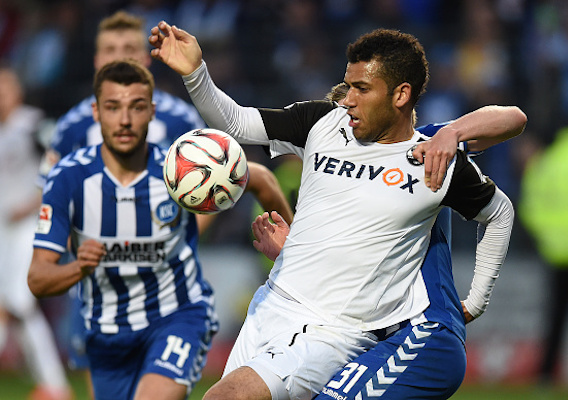 Wooten to ASN: "Hopefully I Can Showcase My Skills"

THE DAY BEGAN like any other for Andrew Wooten. He had finished training and was unwinding as he usually does by watching a soccer match on television. And then the 2.Bundesliga’s co-leading scorer received a call from one of the biggest names in Germany soccer.

But the call had nothing to do with the German national team.

It was United States national team head coach Jurgen Klinsmann on the line, and he asked Wooten to represent the U.S in the upcoming friendlies against Peru and Brazil. To say the call was unexpected would be an understatement. Wooten had never spoken with Klinsmann before and was unaware the U.S. Soccer federation was monitoring his progress.

Needless to say, the 25-year-old gladly accepted the call-up.

“It’s unbelievable,” Wooten told American Soccer Now. “I was speechless and I’m so happy that he finally called me and I’ve just been enjoying it ever since. It took me by complete surprise. I really don’t know what to expect. I am just going to enjoy it and try to do my best.

“Hopefully, somehow, I can get some minutes and showcase my skills.”

Despite his lack of interaction with Klinsmann, this was not Wooten’s first interaction with U.S. Soccer. In 2011, while putting up strong numbers for Kaiserslautern’s reserve team, he received a call-up to the U.S. U-23 team. But then he began to make inroads with the German club’s first team and was playing in the Bundesliga by March.

His first-team obligations prevented him from participating in U.S. Olympic qualifying and ultimately the Americans failed to make it to the 2012 Olympics. Nearly four years later, Wooten is back with the Yanks—with the senior team.

“I always thought about coming back,” Wooten said of playing for the United States. “I missed it. I had a very good time when I played for the U-23 team. I worked hard for that chance. Now that I am called up to the full national team, it’s just amazing. I believed that one day I would be called up to the national team. Now it’s here. It’s amazing.”

“I watched the Gold Cup,” he added. “Of course it is a very good team and I can’t wait to train and play with the guys. I know [the CONCACAF playoff versus Mexico] is an important game and it is a very big rivalry.”

Wooten will join a long list of players on the U.S. national team with predominantly German backgrounds. The recent wave began under head coach Bob Bradley, who brought Jermaine Jones, Timothy Chandler, and David Yelldel into the fold. It has only intensified under Klinsmann, who secured the services of Fabian Johnson, Julian Green, Danny Williams, Terrence Boyd, and John Brooks.

While sometimes these players get lumped into one category, each has a unique story and Wooten is no different. Born in Bamberg, Wooten is the son of Roger Wooten, an American serviceman who helped close down military bases in Germany and the Netherlands.

Andrew and Roger have an extraordinarily tight relationship and speak on a daily basis. Andrew usually travels to America once a year to visit his father, who works on military planes at Tinker Air Force Base in Oklahoma City. Roger Wooten joined the U.S. military when he was 18 and he very much looks forward to seeing his son wear an American jersey.

“I am so proud and so excited,” the elder Wooten said. “You just can’t believe it. I can’t describe it—how the hard work took him this far. It speaks volumes for the hard work and devotion Andrew put into the game. It’s so gratifying to see how far it has taken him. I know what it took for him to get to this point, so it is amazing to see him get to this level with the national team.”

“He’s always been focused and identified with his American side,” he added. “He heavily leaned on it even though he was going to German schools. Up to the time he came back with me to the United States. His American side is very important to him. For me, being an American soldier, and just an American as well, I instilled that in him in the early days.”

The tight background between father and son took an unusual turn when Andrew turned 16. At that point, Andrew returned to the United States to live with his father in Chesapeake, Virginia. There, he figured, he’d pursue his soccer career stateside.

Andrew enrolled at Deep Creek High School—the same school his father had attended. The school has seen many alumni get drafted into the NFL, NBA, and MLB but soccer was not a strong point to say the least.

“It was nowhere near the level of work he needed to be involved with the game like he wanted,” Roger Wooten recalled. “He really wanted to pursue it and the high school we were at, the baseball coach was just filling in as the soccer coach. Once we saw how bad of shape it was in, he couldn’t advance.

“That was the reason for him returning to Germany.”

After essentially a lost year of development in Virginia, Andrew Wooten left and returned to Germany to pursue his career. He has experienced ups and downs from his breakthrough at Kaiserslautern to his consistent presence in the 2.Bundesliga with three different clubs.

Now Wooten finds himself at SV Sandhausen, one of the smallest teams in the 2.Bundesliga. Wooten played for the club on loan in 2012-13 and returned last season on a full-time basis. His contract runs through 2017.

Through the first five games of the season, Sandhausen has three wins, a draw, and a loss – which would have been good enough for third place if the club had not been docked three points for a violation. So the club now sits in fourth with a +6 goal differential that is second best in the league.

Wooten, who has scored five goals in the first three games of the season, deserves plenty of credit for that differential and is determined to build on his strong start.

“I’ve been working hard after training and trying to do more stuff for myself,” Wooten said. “I am staying after training for an extra 20 minutes every day trying to get sharper and better. Right now we have a great spirit on the team.

“We’ve had a very good first three games but it’s only been three games. We can’t lose focus. We cannot stop.”

Klinsmann, among others, took note.

"We've been watching him for more than two years now and we like how dynamic he is and we like his nose for goals. He has a very good instinct of where the ball will drop in the box and knows how to finish things off. We don’t look at him as a youngster coming in because he's 25 years old and in a certain way he's a late bloomer. For him it's important not to lose one second of time to impress his teammates and obviously the coaching staff.

"It's a chance that he has been waiting for for a long time, and because he’s on a good run right now he deserves that chance, but he needs to jump in the cold water and right away swim really fast.”

Wooten will be joining a U.S. national team at a crossroads. Last month, the U.S entered the Gold Cup as the favorite but never looked in synch through its six games and finished in fourth place.

In particular, the tournament highlighted the team’s need for a new group of forwards. Jozy Altidore has been struggling for club and country this summer following a May injury and Aron Johannsson is still getting settled in at his new club, Werder Bremen. Chris Wondolowski, Alan Gordon, and Clint Dempsey are on the wrong side of 30 while young playersincluding Gyasi Zardes, Bobby Wood, and Jordan Morris—have potential but are not yet established.

Wooten has been following the U.S. national team but he doesn’t know what to expect when he arrives in camp. Despite the number of German-American players on the squad, he doesn’t know any of them personally. He speaks regularly with Union Berlin forward Bobby Wood and is on friendly terms with injured Borussia Dortmund winger Joe Gyau.

Despite the uncertainties of what he will encounter when he joins the team, he is upbeat and eager to get started.

“I would say right now it couldn’t get any better,” Wooten said. “I still have to get better and stay focused. I am a little bit nervous but I am more happy than nervous.”

He won’t lack for support. Family members based in Chesapeake will be making the 200-mile drive to Washington, D.C. for the match against Peru and his father will fly in from Oklahoma to attend the contest.

“My sister, his cousins, and others are all going to be there, no doubt,” a beaming Roger Wooten said, adding that he will be wearing a Sandhausen jersey with his son’s name on the back. “I cleared it with my bosses and they understand the magnitude of it all.

“Everyone on the base knows all about him. Getting time off work here at the military base was no problem. I’m always talking about Andrew here at work and around town.

“I wouldn’t miss it for the world."