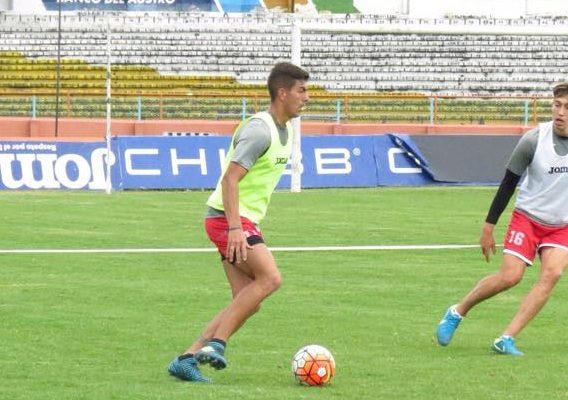 With career back on track, Hoyos eyes bright future - possibly in MLS

As a teenager, Michael Hoyos had an very impressive start to his career in Argentina. A near-tragic auto accident set him back but the California native has quitely rebuilt his career in Ecuador and hopes for an MLS move.
BY Brian Sciaretta Posted
October 26, 2018
12:15 AM
IN THE TYPICAL career of a professional footballer it is normal for there to be peaks and valleys. For Michael Hoyos, however, the highs and lows have been extremes. Fortunately for the California native, his career is starting to trend upward again.

After growing up in Southern California, he moved to Argentina with his mother when he was 15. It was there he joined the academy at Estudiantes de la Plata and made his debut with the first team in 2010 at the age of 18.

Hoyos made an immediate strong impact and scored a goalzo in his first start. As a regular first teamer where he played as an attacking winger with a poweful six foot frame, he caught the attention of the youth national teams of Argentina and the United States.

At the time, the pressures were strong for him to play for Argentina – which he did at the U-20 level. That summer, he traveled to South Africa where he was part of a team that would practice with Argentina World Cup team.

“I played for Argentina’s U-20s at a time I was taking my first professional steps with the first team at Estudiantes de la Plata,” Hoyos recalled from Guayaquil, Ecuador. “It was hard because I obviously wanted to come to the States but I couldn’t because of the trip and I would miss playing games for Estudiantes. So I had the national team with Argentina close. I could play for the national team for a few days and then go back to my club. There wasn’t a travel issue between.”

The following year he was part of Argentina’s U-20 World Cup qualifying team and was then scheduled to play in the U-20 World Cup that summer. But on April 11, 2011, he was involved in a serious car accident in Argentina. The result was terrible. He was in intensive care for over a week and in the hospital nearly a month. No bones were broken but the damage was severe. The accident left himhead trauma and a major concussion.

In total, he couldn’t play for over nine months as the risk of having any contact with his head was too great. Once he was able to get back on the field physically, the mental challenges lingered. He bounced around clubs – once in Greece and the rest at lower levels in Argentina.

“It was really, really tough,” Hoyos explained. “I was playing for Estudiantes first team and I had the U-20 World Cup coming up with Argentina. I lost a lot of time on the field. It was like I had to start all over again. That is why I started going to different clubs trying to find your game again. It’s tough mentally because once you see how far you can go and then have to start all over again, it was actually really difficult.”

It wasn’t until 2017 when his career finally became settled and trending upwards. It started when top flight Ecuadorian club, Deportivo Cuenca, decided to bring a wave of Argentine players. For the first time in his career he was able to play over 2000 minutes in a season – including games in the Copa Sudamericana.

At the start of 2018, he moved within Ecuador and joined Guayaquil City – one of Ecuador’s newer teams that was renamed under new ownership after the demise of River Ecuador. Hoyos was brought in to provide veteran leadership to a very young team. The team has struggled and is in last place but Hoyos has been the team’s better offensive threats from his wing position – scoring seven goals and adding four assists over nearly 2500 minutes in 2018.

He has two goals in his last three games, including one in a 4-3 loss last weekend to SC Barcelona.

“Group-wise, it's not what we were expecting for the season,” Hoyos explained. “It's a new club that is just getting organized. There are a lot of young players and there are a lot of player who have experience, like myself. For a lot of the kids, it’s their first steps and first games in the first division. We know how football goes with statistics. We're playing well but we maybe don’t have that experience in the final minutes and we've lost a lot of games at the end. That happened seven or eight games. The experience on the team is what is what is lacking.”

“For me it's been a great season,” he added. “I am producing. I am scoring and playing well. I am really happy with where I am at right now. But this year and last year are two years where I finally found my form and my game again. I found the way I really want to live.”

Things are finally looking up for Hoyos in many ways. He is comfortable with life where he has found religion and has a family with three children. On the field, he has found stability after the car accident had has played nearly 5000 minutes of top-flight soccer over the past two years in Ecuador.

The next few months, however, will be very telling. Due to Guayaquil City’s last-place standing, the club has not engaged in offering a new contract to the veteran Hoyos. His contract is set to expire at the end of December and his production over the last two years will give him options.

One such option that he hopes arises is the opportunity to return to the United States. Due to the long seasons in Ecuador’s league, Hoyos has not been able to return to visit the United States in several years. What little time he has off is spent back in Argentina where his mother lives and his wife and her family are from.

He still has plenty of family back in his native California in the Orange County area – including his father and grandmother.

Now 27, Hoyos is happy in South America in both Ecuador and Argentina, an offer to play in MLS is something he hopes comes his way. He has been following the league in recent years and has watched the growing trend of South Americans coming into the league. The opportunity to return home would be ideal and would give him a chance to boost his profile for another goal he still has – to play for the United States national team – (despite playing for Argentina’s U-20 team, he is still eligible via a one-time change of associations switch with FIFA).

“I have my contract here until to December,” Hoyos said. “I haven't had any offers from them to stay but I am probably going to have a lot of options. This is my second year here. I am really happy here. The football is great. It’s technical and I am waiting to see what is coming next year.

“I would always love to come back to the states,” he added. “Not only to visit, but also to play. The league has grown a lot and it’s always been a desire of mine to go to MLS and play. That and play for the U.S. national team. Hopefully one day it can happen. I still have the opportunity to play for the United States and that is still one of my goals – to wear my country’s colors and jersey.

“This year has been an excellent year for me and it isn’t over yet - I feel that better things are yet to come.”