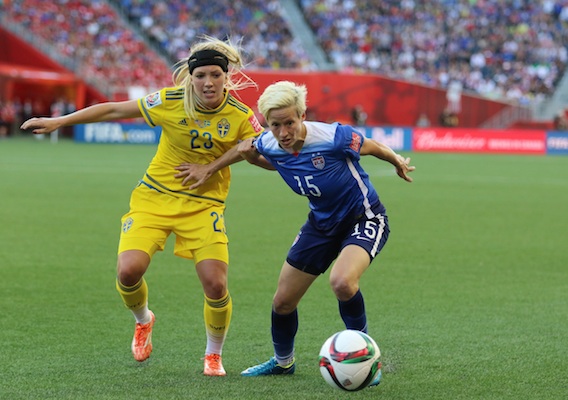 Will the U.S. Get Offense on Track Against Nigeria?

Following a gritty scoreless draw with Sweden on Friday night, a win against the Super Falcons in the final match of group play would help the U.S. lock up the top spot in the group—and likely provide an easier path during the knockout stages. Here's what to watch for.

While Nigeria will head into the game against the U.S. in last-place in Group D, they still have a chance—albeit slim—of advancing to the knockout stage.

The Super Falcons were a mystery heading into the tournament and may be just as big a mystery after two matches. In its opener, Nigeria fought its way to a very respectable 3-3 draw against the fifth-ranked Swedes, repeatedly breaking down a defense that the U.S. found impenetrable on Friday night.

However, against Australia in its second group stage match, Nigeria stumbled, losing 2-0 to the Aussies and putting its World Cup hopes on life support.

The Nigerian attack is led by Asisat Oshoala, who won both the Golden Ball and Golden Shoe at last summer's U-20 World Cup. As Oshoala demonstrated in her goal against Sweden, she possesses a formidable combination of pace and power.

The weakness, however, for the Nigerians is its defense. Against the Swedes, the set piece defending was shambolic and in both matches the Nigerian goalkeeping has been poor—to say the least.

Finally, the Nigerians will head into the game without defender Ugo Njoku—who did not start either game thus far—as she has received a three-match ban for this vicious elbow against Australia.

For the U.S., there are a number of questions heading into the match. First and foremost on the list: Can the U.S. offense get on track?

After getting off to a good start against Australia by scoring three goals, the U.S. attack sputtered against Sweden. Not only did the Americans not score, they generated few noteworthy chances on goal.

Fortunately, defending is not Nigeria's strong suit and Tuesday's game represents the perfect opportunity to get clicking.

WHO SHOULD START FOR THE U.S.? TELL US HERE.

Against Sweden, Ellis went with Sydney Leroux and Christen Press up top. Many had called for the move, insisting that Press was best used as a forward and that much of the U.S.' offensive malaise had been caused by the continued inclusion of Abby Wambach at the tip of the spear.

However, neither the move of Press up to nor the exclusion of Wambach from the starting XI woke up the U.S. offense. In fact it may have caused more problems than the changes were worth.

In Press' place on the wing, Ellis slotted in Morgan Brian who, even after she calmed down from a nervy first five minutes of action, was not great. Press and Leroux, for their part, struggled to hold the ball up effectively and created little in terms of opportunities for themselves or their teammates.

One solution against Nigeria would be to start Tobin Heath on the wing. Heath was the earliest-used and best-rated substitute in the U.S.'s opener against Australia, but instead of slotting into the starting XI against Sweden, Heath somehow fell all the way down the depth chart to unused substitute.

Absent a complete midfield makeover—which is probably the only real solution—Heath may be the best option Ellis has to unlock a U.S. attack which has been shutout in five of its last 13 matches and has seen its forwards go scoreless in their last three games.

A final choice for Ellis would be to move Press back to the wing and, once again, tinker with the combination up top—possibly by giving Amy Rodriguez the start, or risking a start for the still-recovering Alex Morgan.

On the defensive side of things, the Americans look very good. Against Sweden, the Yanks picked up their 10th shutout in their last 14 games and the center back duo of Becky Sauerbrunn and Julie Johnston looked particularly impressive. Hope Solo, for all her off-the-field issues, has also looked solid for the U.S. in goal.

Against Nigeria's speedy attack, the U.S. defense will need to be just as good on Tuesday, especially if the U.S. attack struggles to put up goals. A win against the Super Falcons guarantees that the U.S. would win Group D. A comprehensive list of advancement scenarios can be found here.