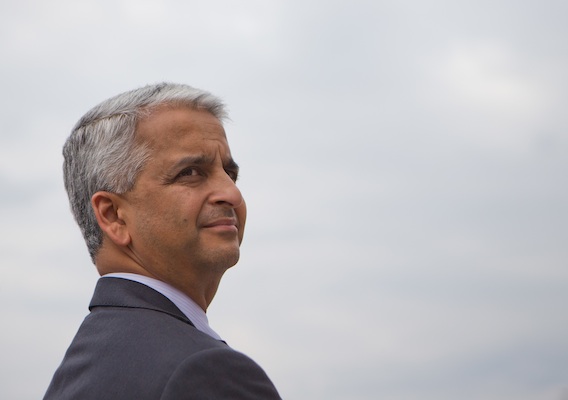 Will Sunil Gulati Stand Up to FIFA, Help Bring Reform?

FIFA showed its true colors Friday, extending Sepp Blatter's reign at the top of one of the most secretive and corrupt organizations in the world. One man is positioned to lead reform efforts, but will he?
BY Brooke Tunstall Posted
May 30, 2015
2:15 PM

AFTER PRINCE ALI BIN AL-HUSSEIN of Jordan conceded in the FIFA presidential election to corrupt overlord Sepp Blatter yesterday, he thanked those “brave enough” to support him and then the first person he hugged was U.S. Soccer Federation president Sunil Gulati.

Under Gulati’s watch, the United States allegedly did not vote for Blatter, a move seen as a no-brainer after this week’s federal indictments of myriad top FIFA officials on various corruption charges. But it's still a move that carries considerable risk for Gulati given the blowback American soccer is already likely to face as a result of the charges our government has brought.

But now is not the time for Gulati to stop with a public vote against Blatter. Now he must take on an even bigger role.

Gulati is like Robert the Bruce, the 14th century Scottish king immortalized in the 1995 Academy Award-winning movie Braveheart. Gulati is respected by noble and commoner alike. He is rightly seen as a FIFA insider and power broker but also considered someone who genuinely wants reform. He is able to work the back-channels of international sport and continue to rise but somehow keeps himself separate from the muck that has attached itself to so many of the powers that be in the sport.

Gulati isn’t squeaky clean when it comes to conflicts of interest. His work on behalf of the Kraft family, who continue to somehow miraculously get chosen to host U.S. national team games at Gillette Stadium, comes to mind. And he made his bones in the soccer world alongside now-indicted former CONCACAF poobah Chuck Blazer—so even if he didn’t give in to the corruption like Blazer did, he certainly didn’t do much over the years to stop Blazer (and others) from treating CONCACAF like a cash buffet.

But turning a blind eye back then was how one rose to power in the world of international soccer and Gulati has deftly worked the political system to become as prominent an American in the international game as has ever existed.

And that’s why it’s time for him to turn up the pressure on FIFA and to use representing one of the largest and wealthiest markets in the world to put more pressure for change, reform, and transparency in the organization that runs the world’s game.

If Gulati continues to accept the status quo as a means to help the U.S. get ahead short term, he is wasting a chance not just to reform soccer and FIFA but to make the U.S. one of the most prominent voices in world soccer.

The 55-year-old Columbia University senior lecturer now has the eyes of the nation on him, the backing of its government behind him, and the moral support of much of the western world. Here is where Gulati needs take his cue from Robert the Bruce, and show the way.

In the movie, William Wallace pleads for Robert the Bruce to lead the Scots in their independence against the English crown. History tells us Bruce did just that: After several years of bloody battles, he helped establish an independent Scotland in the early 1300s.

In his battles Bruce had the backing of both the commoner and nobles. Gulati has a similar backing, with support from soccer fans (commoners) across the world clamoring for change with FIFA and leaders of many of the top soccer countries (nobles) who are tired of FIFA’s corruption.

Here is where Gulati should use his, and his country’s, clout to push and threaten and lead the charge for more change. No country’s television rights are worth more to FIFA than those sold to broadcast the World Cup in the U.S. No country is home to more FIFA corporate sponsors than the U.S.

But how much money are those networks and companies going to pay for a World Cup that the U.S. boycotted? How much would they pay if England, Germany, Mexico, Australia, and Japan followed suit?

Gulati, more than any other figure in the world’s game, is now positioned to lead those changes. We all know money drives FIFA. Well, if you want to make real change within the organization, take action that threatens the biggest sources of revenue.

In this day and age, FIFA and the World Cup need the bigger soccer nations far more than the soccer nations need FIFA. If the organization doesn’t acquiesce to the changes to clean itself up, then the biggest players should, literally, take their ball and start their own tournament, with the U.S. leading the way.

Does anybody doubt that ESPN wouldn’t gleefully pay a nice rights fee for an alternative World Cup featuring fed-up countries that boycotted FIFA and walked away?

And it shouldn’t just stop there. All those cash-grab international friendlies and exhibitions between foreign clubs played on U.S. soil? Like the mafia they so often resemble, FIFA cronies get a taste of the action and none of it happens without the approval of the federation of the host country.

Let that money source dry up and see how much pressure clubs put on their federations to play ball.

That means if Gulati has the U.S. Soccer Federation say no, all those summer friendlies that sell out NFL stadiums and make big money for the likes of Manchester United and Barcelona, with trickle-down cash going to the coffers of FIFA and CONCACAF, don’t happen.

Speaking of CONCACAF, its biggest cash generator is the Gold Cup and there’s a reason it’s always played in the U.S. and that’s because more tickets, and at a higher price, can be sold for Gold Cup games here than any other country in the region.

You think if Costa Rica hosts a game between Jamaica and El Salvador that it sells as many tickets there than it does in Miami or Washington, D.C.? CONCACAF needs the U.S., badly. So it’s time to use the might of the market and demand reform.

If the Jamaicans and their corrupt federation leader “Captain” Horace Burrell don’t like it, let them see how much money from CONCACAF comes their way without a lucrative Gold Cup played in the U.S.

Yeah, it will piss off a lot of people that Gulati rubs shoulders with at FIFA meetings, but so what? More of Gulati’s constituents—American soccer supporters—are livid about the state of FIFA and CONCACAF than there are upset tin-pot soccer leaders.

All this takes is courage—a brave heart. But Gulati can do it if he chooses to do so. He has momentum and Loretta Lynch and the power of doing the right thing all behind him.