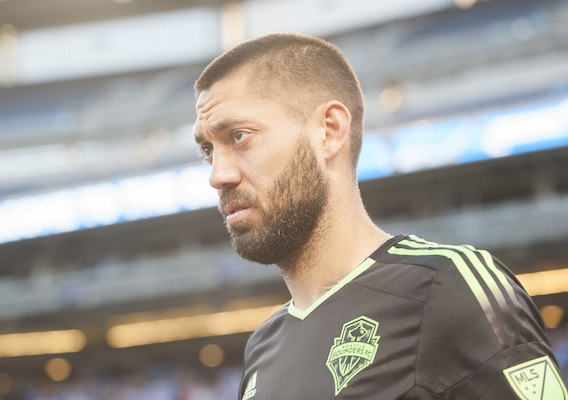 How Will Dempsey Be Punished For His Outburst?

Displaying some distinctly uncaptainlike behavior, the man who wears the armband for the U.S. men's national team grabbed a referee's notebook last night and ripped it up. He could be in a lot of trouble.
BY Brian Sciaretta Posted
June 17, 2015
8:00 AM

LAST NIGHT IN EXTRA TIME, Seattle Sounders forward and U.S. national team captain Clint Dempsey was given his second yellow card for taking referee Daniel Radford’s notebook and ripping it up in frustration. Seattle lost to Portland in the U.S. Open Cup clash, 3-1.

It was quite an impetuous maneuver from a player with a long history of pushing the limits. And it could have serious ramifications.

Section 531-9 of U.S. Soccer’s policy manual covers “Misconduct towards game officials" and suggests that Dempsey may be in serious trouble.

Section 1 defines the nature of the rule: “Misconduct against referees may occur before, during and after the match, including travel to or from the match. Misconduct may occur also at later times when directly related to duties of a game official as a referee.”

Where things get dicey for Dempsey is in Section 5, which lists what constitutes assault and indicates the penalties:

(1) The person committing the referee assault must be suspended as follows:

(a) for a minor or slight touching of the referee or the referee's uniform or personal property, at least 3 months from the time of the assault

Dempsey clearly touched the referee’s “personal property.” The language also uses the term “must,” making it clear that the three-month suspension is mandatory.

The U.S. Open Cup is run by U.S. Soccer and Dempsey is one of the biggest stars for both Major League Soccer and the U.S. national team. If the rules are followed to the letter, Dempsey would be miss the entire Gold Cup and could not return to MLS until at September 16.

A second possible interpretation of the rules can be found in Policy 202(1)(H)-2—Professional Leagues Policy Against Referee Assault which carries a different series of rules and penalties.

“(1) Any player, coach, manager, club official, or league official who commits an intentional act of physical violence at or upon a referee (“Referee Assault”) shall be suspended without pay for a period of at least six consecutive matches (the “Assault Suspension”). The Assault Suspension shall commence with the first match after which the individual has been found to have committed this act. (2) For purposes of this subparagraph 2(a), “Referee Assault” shall include, but is not limited to: striking, kicking, choking, grabbing or bodily running into a referee; spitting on a referee with ostensible intent to do so; kicking or throwing an object at an official that could inflict injury; or damaging the referee’s uniform or personal property (e.g., car, uniform, or equipment).”

The statue goes on to state clearly that this suspension will apply to both MLS play and United States national team games. Here, MLS must apply a penalty equal to what is in the statue of U.S. Soccer.

“The Professional League Member may not provide for a penalty shorter than the Abuse Suspension but may provide for a longer suspension and/or a fine.”

And then the suspension will cover the games of the national team:

“For purposes of the Assault Suspension and the Abuse Suspension, a “match” shall mean any official match of that individual’s team in the Professional League Member for which there is paid attendance, i.e., regular season, playoff, officially cups and tournaments, and international games played in the United States”

So according to the rules of 202(1)(H)-2, Dempsey would be looking at a minimum of six game suspension of found guilty of referee abuse for destroying the notepad.

The policy that American Soccer Now cited 531-9 requires a three month suspension for the same offense however there is this rule:

“This policy shall not apply to players, coaches, managers, club officials, or league officials while participating in Professional League Member activities.”

The interpretation here is whether or not the U.S Open Cup is a Professional League Member activity. While the MLS is a professional league member, does participation of its teams in the Open Cup (which (has teams from various leagues constitute an activity of that league? Herein lies the confusing nature of the statue. U.S. Soccer runs the Open Cup, not MLS or the various leagues that play in the competition.

U.S. Soccer’s interpretation will likely be that the Open Cup is a Professional League Member activity and therefore the minimum six game penalty would apply to assault as opposed to the three month suspension. Either way, U.S. Soccer is looking into the matter as it tweeted out that the U.S. Open Cup Adjudication and Discipline Panel will review the incidents from the game.

How can U.S. Soccer avoid punishing Dempsey for a clear violation for its own rules?

Stay tuned and bring some popcorn.