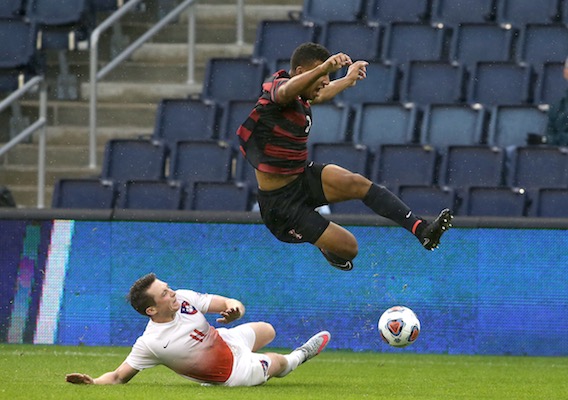 The Stanford University fullback is on an upward trajectory these days, leading his college team to an NCAA championship in December and getting a call-up to the United States national team this month.
BY Brian Sciaretta Posted
January 11, 2016
1:30 PM

UNITED STATES MEN'S national team head coach and technical director Jurgen Klinsmann made changes to his team's roster over the weekend and most were of the ho-hum variety: Steve Birnbaum, David Bingham, and Perry Kitchen all joined the squad while Fatai Alashe and Marc Pelosi withdrew due to injuries.

One addition, however, stood out.

Brandon Vincent was added to the roster after leading Stanford University to the NCAA national title. A left back, Vincent is now one of just two full-time fullbacks on the U.S. roster (Montreal right back Eric Miller is the other).

In 2014, fellow Cardinal star Jordan Morris was a controversial call-up when he joined the U.S. senior squad against the Czech Republic—its first friendly after the World Cup. For the most part that move has worked out for all parties: Morris has played well in his limited opportunities and now is on trial with Werder Bremen as he considers a contract offer from the Seattle Sounders.

It makes sense to add Vincent at this stage because the 2016 January camp is also crafted with the U.S. U-23 team‚ for which Vincent is age eligible.

While I generally like seeing players earn their way up to national teams based on consistent professional experience, Vincent addresses a massive hole right at the fullback position. Recent U-23 Olympic qualifying matches have shown that there are just not a lot of American fullbacks at younger levels. Lately the U.S. has been forced to play central midfielders at fullback, including Matt Polster, Marc Pelosi, and Kellyn Acosta.

What do you need to know about Vincent?

Well, he's smart: He's an Economics major at Stanford and was named the 2015 Pac-12 Men’s Soccer Scholar-Athlete of the Year. His maturity level was on display throughout the season and wearing the armband for the national champion speaks to his character.

Vincent likes to get forward but is not going to compromise his defensive responsibilities to do so. He scored 13 goals during his Stanford career (aided by taking penalties) but does like to stretch his opponents and push forward into the attack.

The U.S. U-23 team has an uphill climb to make the 2016 Olympics—its winner-take-all playoff series against Colombia is set for March and will determine which team heads to Rio. So it's promising to see Klinsmann and U-23 head coach Andi Herzog continue to look at new players who were not involved in qualifying.

Finding an actual fullback to play the position shouldn't be a groundbreaking development, but it qualifies for one in U.S. youth circles. Vincent may not have what it takes to play at the international level, but it's a worthy experiment to give him a shot during January camp.