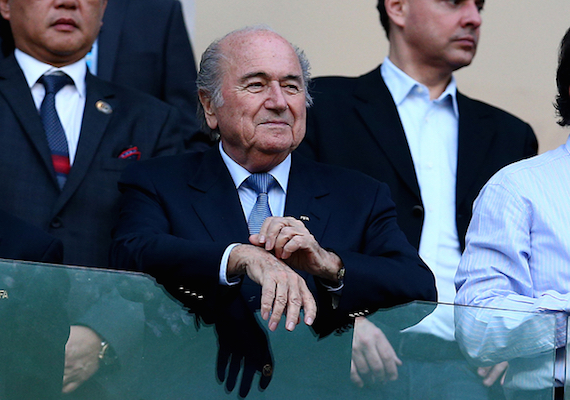 American Soccer Now's resident legal expert talks us through why FIFA's head shocked the world and said goodbye to the organization he ruled with an iron wallet for over a decade.
BY Steven Bank Posted
June 02, 2015
4:10 PM

IT'S NOT SURPRISING that Sepp Blatter did not make it through his full term as FIFA president, given both his age and the scandals and indictments swirling about him.

Nevertheless, it is somewhat surprising that he retired on Tuesday, after surviving an election just last week. Indeed, he reportedly told Swiss TV on Friday, “Why would I step down? That would mean I recognize that I did wrong." What changed, then, between Friday and today?

Here are a couple of explanations, given what we know right now:

1. New evidence convinced him that the gig was up.

This surely at least played a role in today’s turn of events. This morning, there was news of a letter from South African officials addressed to Jerome Valcke, Blatter’s No. 2 at FIFA, asking him to withhold $10 million from funds that would otherwise be due to the country and to instead direct them to a “Diaspora Legacy Programme” that appears to be a front for funneling money to Jack Warner in exchange for his World Cup vote.

Given the existence of this letter, Blatter may have assumed that it was only a matter of time before he would be indicted based on evidence already collected or on testimony that would be secured from those already indicted.

According to court documents, Aaron Davidson, a soccer executive with Traffic Sports who was one of the individuals indicted in the first wave, has already asked the judge to stop the clock on his right to a speedy trial because the parties were engaged in plea negotiations, which likely means the parties are discussing what testimony he could offer in exchange for a lighter sentence or reduced charges. While Davidson is fairly far removed from Blatter, this is a step in the direction of securing further indictments of people higher up the chain.

Given Valcke’s potential involvement, Blatter may have known that the noose was growing closer around his own neck. Under those circumstances, he could have decided to resign simply as a way to focus on his own defense (or to spirit himself away to some friendly island without an extradition treaty).

The problem with this explanation, however, is that he had to know it was the end game even before the latest revelations. It is true that the indictments put more of the evidence in the open. While the case was before the grand jury, the potential targets of the indictments could not have been aware of the strength of the U.S. government’s case because they are not public proceedings and defendants and their attorneys do not have the right to appear when the prosecutor presents their case before the grand jury. Once the defendants were arrested, however, much of the evidence would start to become available to defendants and their attorneys through the discovery process and information about the strength of the evidence could have gotten back to Blatter.

Nevertheless, that process usually takes longer than just a few days. After all, most of the top FIFA executives that were arrested are still in Switzerland. The plan is to extradite them, but they generally have stated that they plan to fight extradition, which means that they haven’t even begun to meet with the U.S. prosecutors and address the evidence that has been amassed against them.

It is more likely that Chuck Blazer has provided most of the evidence against FIFA officials thus far, but Blatter has known about Blazer’s cooperation with the government case for quite some time and he knew that it had proven useful and convincing enough to lead to more indictments even before Blatter stood for re-election. Finally, even if he wanted to focus on his own defense, Blatter did not technically resign from the top post at FIFA. He still intends to stay on until his successor is elected.

It may be that the U.S. has directly or indirectly approached Blatter and indicated that they would avoid pursuing indictment if he resigned from his post at FIFA. One could certainly see why Blatter would find such a deal attractive. If he considered his arrest and extradition inevitable based on evidence presented to him, he may just have decided that this would be a way to go out with the high ground.

One problem with this explanation is that the U.S. is unlikely to have had any contact with Blatter directly and it is hard to imagine that he would resign on the hopes that the U.S. would look more favorably upon him if he did resign. It is possible that attorneys contacted the Justice Department on his behalf to broker this deal, but that still leaves open the question of why they would choose to offer such a deal.

A possible rationale is that they decided a top-down strategy would work better than a bottom-up strategy. Although Blatter is more of a symbol of FIFA corruption than the sole mastermind, he surely knows where most, if not all, of the bodies are buried. Prosecuting lower-level officials and working their way up would take time. Flipping Blatter could circumvent that process considerably and may hold the most promise in rooting out the corruption at the confederation level.

3. He has cut a deal with the Swiss

When the U.S. indictments were handed down and the Swiss arrested the indicted officials in preparation for extradition, the Swiss announced that they were also pursuing their own investigation, centered primarily around the 2018 and 2022 World Cup bids. The U.S. has gotten much of the credit for driving this attack on FIFA corruption, but the Swiss deserve some as well. It is possible that they have threatened to deliver Blatter to the U.S. on a silver platter if he did not resign. The Swiss, after all, have more of a vested interest in FIFA than most given the fact that its headquarters are located in the country.

Although the motivation seems plausible, it seems less probable that the Swiss, which only recently announced its investigation, would be far enough along to leverage it as part of a power play against Blatter. Nevertheless, there is the possibility that the Swiss pushed the U.S. to take this step, perhaps in part as a reward for their full backing in the arrests and the investigation.

4. He has cut a deal with his political opponents

This is the most Mafia-inspired explanation, but that makes it no less plausible. Blatter won re-election, but not without legitimate opposition. Moreover, over the years he has likely made many enemies. Indeed, one of the byproducts of the bribery revelations is that some of his former allies may have learned that he underpaid them. Jack Warner got $10 million to deliver CONCACAF’s vote for the 2010 World Cup vote? What did other federation leaders get?

Leaders of criminal organizations maintain opacity both internally and externally just as much for governance reasons as for avoiding capture. It may be that the continuing revelations have created dangerous divisions within FIFA. His opponents may have explained to him that they too would “not forget” these transgressions, which could result in handing over evidence to the U.S., tipping off those he double-crossed, or worse, to continue the Mafia analogy.

Indeed, the way that Blatter resigned is somewhat inconsistent with the way a government would force a suspected criminal to resign. If they have the goods on him, why would they let him preside over the organization during its reform period and while it conducts elections for the next leader? Why let a criminal stay in power long enough to be a kingmaker?

On the other hand, if he is resigning to create space for a blackmailing opponent to take over, then he would need to remain in power and to be part of the “reform” process to ensure that his opponent gets the job. Simply departing would create a vacuum. Remaining in the shadows during the reformation of FIFA, though, might allow him to continue to pull the strings.

Sounds outlandish and Hollywood-ish, of course, but given that this is FIFA, it’s hard to rule it out.