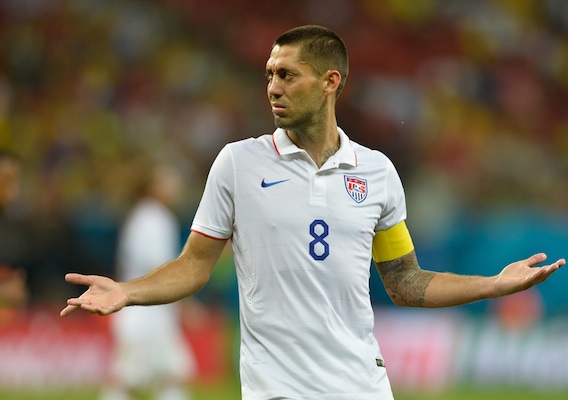 What's It Going To Take For The Yanks To Advance?

When Cristiano Ronaldo made that inch-perfect cross to Varela on the last play of Sunday's match, it meant that the U.S. would need to wait until Thursday to see if they advance. Blake Thomsen has the details.
BY Blake Thomsen Posted
June 22, 2014
10:14 PM
CAN ANYONE BREATHE YET? Let’s get right to it. Here’s your updated scenarios. If the U.S. beats Germany...
The U.S. is through as Group G winners, and will play the second place team from Group H in the round of 16. If the U.S. draws Germany...
The U.S. is through as the second-place team in Group G, with Germany winning the group on goal differential. The Americans would play the first place team in Group H. If the U.S. loses to Germany...
Here’s where all of the scenarios come into play. If the U.S. loses by one goal, Ghana would only need to beat Portugal by one to tie the U.S. on goal differential. Then it would come down to goals scored. The U.S. currently holds a 4-3 edge. So if the U.S. loses by the same score as Ghana wins (provided that it's a one-goal margin), the U.S. will progress via the head-to-head tiebreaker, as both teams would have the same goal differential and goals scored. Consider a 2-1 win for Ghana and 2-1 loss for the U.S., which would leave both teams with goal differentials of zero and five goals scored—the U.S. would advance on head-to-head. But if Ghana wins via a one-goal margin in a higher scoring game than U.S.-Germany, Ghana will go through on goals scored. Consider how a 1-0 loss for the U.S. and 2-1 win for Ghana would see the teams tied on goal differential but with Ghana scoring five goals to the U.S.’s four. This repeats itself indefinitely. (A 100-99 win for Ghana and 99-98 loss for the U.S. would still see Ghana through by one goal scored. It might also make a few headlines along the way) On the flip side, if the U.S. loses in a higher scoring game—with a one-goal margin—than Ghana wins, the U.S. will be through purely on goals scored. Also: If the U.S. loses by two or more, Ghana will advance with any win. If Ghana wins by two or more, Ghana advances with any U.S. loss. Perhaps working in the U.S.’s favor is that Portugal still has all to play for, and thus will likely put up a real fight against Ghana. Portugal can advance with a win and U.S. loss that helps Portugal make up a five-goal differential behind the U.S. That means Portugal and Germany would need to win by a combined five-goal margin for Portugal to tie the U.S. Goals scored could come into play here—the U.S. currently holds a two-goal edge, 4-2. So if the goal differential and goals scored end up even, the U.S. and Portugal would draw lots to see who advances. A 3-0 Portugal win and 3-1 U.S. loss (or 2-0 Portugal win and 3-1 U.S. loss, etc) would see this scenario. My brain hurts worse than it did before. Wins for Portugal and Germany that add up to a more than five-goal differential would see the Portuguese through, while wins for Portugal and Germany that add up to a less than five-goal differential would see the U.S. through by a hair. With both games being played simultaneously, we could be in for an absurd range of possibilities over what could be an emotionally punishing 90 minutes on Thursday. Buckle up, U.S. fans. Could U.S. knockout stage ever really be easy? It sure looked that way at the 94:30 mark, but alas, here we are. Blake Thomsen is an ASN contributing editor. Follow him on Twitter and talk some soccer.