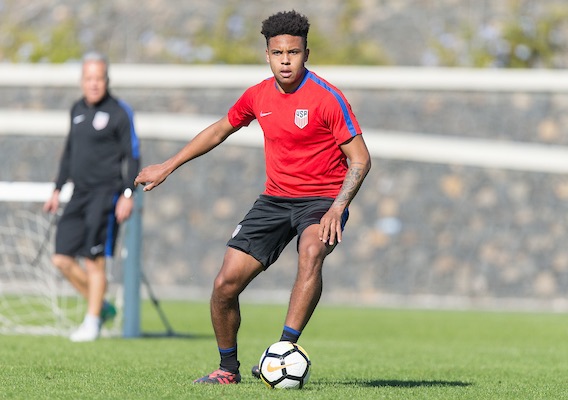 The United States men's national team midfielder is ready to show American fans what he can do. If only he could be playing in Russia this summer. Oh well. Would you settle for Lisbon on a Tuesday?
BY Brian Sciaretta Posted
November 13, 2017
10:20 PM

When Weston McKennie made his Bundesliga debut for Schalke last May and followed it up with a breakthough start to the 2017/18 season, everyone knew his United States national team debut was only a matter of time.

That time has now come but the circumstances are far from what was expected. Instead of being part of a youth movement ahead of the 2018 World Cup in Russia, McKennie is now part of a rebuilding process after the team’s first failure to qualify for the tournament since 1986.

Together with Cameron Cater-Vickers, Josh Sargent, and Tyler Adams, McKennie is one of four capless teenagers on the roster that will face Portugal on Tuesday. The quartet has developed a nice bond. McKennie knows Adams from residency and is roommates in Portugal with Cameron Carter-Vickers.

“There are few guys here that were part of the qualifying process but it was talked about a lot and lot of people made comments and shared their personal opinions about it,” McKennie told ASN from Portugal. “The best thing we can do is rebuild for the future and everyone is coming out here trying to be positive. We have couple of new guys and players looking for their first cap, such as myself…Everyone is looking forward to moving forward as quick as possible. We all support each other and we are all trying to get through this together. I don't think it of it as pressure. I think most of us see it as a challenge. It's something to look forward to.”

“It's been a good couple of days, competitive days, and it's been exciting as well,” he added. “It's nice to be able to get in here with the full national team because it's the highest level you can reach internationally.”

McKennie knows that at the end of the road the burden will fall on him and other players of his generation.

“Of course I was disappointed seeing it,” McKennie said of the aftermath of the loss last month. “It's one of those things where you are thinking: 'is this a bad dream?' But, of course, do I think that now it's up to our generation? Yes, I do think about that. But we have to focus one game at a time, build it up, get new faces in, see what clicks, and what chemistry people have. Of course I was upset about it. For some people it directly affects them. For me, I didn't play in the U-17 World Cup and I wasn't able to play in the U-20 World Cup. I was looking forward to getting the opportunity to try to make the World Cup roster for the senior team. But I have to focus on the next one.”

And so far he has impressed in camp. McKennie credits Sarachan in creating a positive vibe with intense training and a lot of energy. For his part, Sarachan told ESPNFC that he is impressed with what he’s seen out of McKennie.

"McKennie has come in with confidence, and he's shown that he's very good on the ball," Sarachan said. "Now that I've seen him, his composure on the ball, he's gotten a little bit stronger, his reading of things has been clear. He's mobile enough. That's why these games are so good: You can get a sense of guys. You get to measure yourself against the best."

But unlike many American teenagers, McKennie is playing against the best regularly. He has seven Bundesliga and two German Cup appearances for a Schalke team that currently sits in fourth place and is looking to make a return to Europe next year. He features both as a No. 6 and as a No. 8 and is quick to point out that he likes both roles and sometimes plays a hybrid position between the two. He likes to win balls and distribute as the No. 6, but he loves to get forward and make the final pass as the No. 8.

His rise through Schalke has been extremely fast since he joined last summer from the FC Dallas Academy where he developed for seven years. Despite missing over two months last year with an injury, he was able to make his Bundesliga debut in the season finale.

“It was a challenging process,” McKennie said of going from the youth levels to the Bundesliga. “My first game that I played this season, I got subbed in against RB Leipzig. I was a little nervous and it was one of those things where I took my first sprint and I was like: 'oh my god.' But after you get the vibe of the game and you start completing passes, it's something that you go: 'I am really doing this, I can keep up with thing.”

As for success in the highest leagues, McKennie believes there will be more players on the horizon who will find success.

“You kind of see it more and more,” McKennie said. “There are more players starting to go overseas. The talent and quality of the players is also growing with each age group. You see players at the U-17s and the U-19s that are mindblowing players. Hopefully they keep that growth and keep going up. It'll be an interesting couple of years as players come in and out. You'll see what they bring to the table. The plan is that hopefully we won't rely on one or two players to make a difference for the national team. Hopefully it will be all 11 players. I think with the next generation, you'll see more of that.”

As for now, the friendly against Portugal probably won’t amount to much but McKennie, Pulisic, Adams, Sargent, and others will continue to generate hope and hype in the American circles as the solution to the current woes of the team.

But as for the hype, it has been the downfall for some American players both domestically and abroad who wilted under the pressure. Others, however, have thrived on it. McKenie is well aware that he is talked about after getting starts for Schalke, and he is perfectly fine with that.

“I try to tune out of it but I also use it as motivation because I am not afraid of failing but there have been so many people that have been hyped up like that and you see them fall off the radar,” McKennie said. “I don't want that to happen. With Christian, he got hyped up but he was not one of those players that got hyped up and sat back and was content with it. I want to be one of those players that are hyped up and maybe give them more stuff to hype up. I just want to keep the train going forward.”