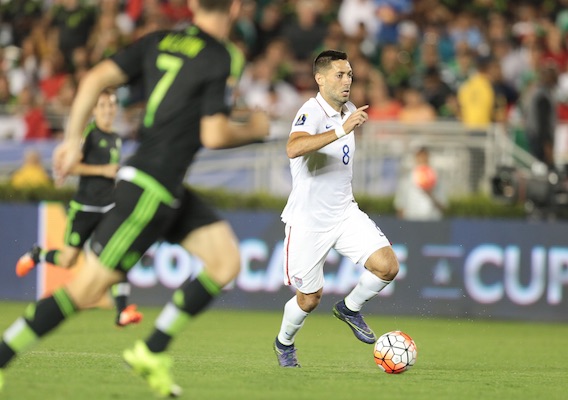 American strikers Clint Dempsey and Jozy Altidore never posed much of a threat in Saturday's CONCACAF Cup clash with Mexico, tilting the field in El Tri's favor and producing some poor performances.
BY John Godfrey Posted
October 11, 2015
10:30 AM

Brad Guzan—The Aston Villa goalkeeper has nothing to be ashamed of, certainly, but he didn't produce any saves of the spectacular variety—which might have made the difference in the U.S. loss. Apparently, Jurgen Klinsmann was planning to bring Nick Rimando during the final moments of extra time so the Real Salt Lake backstop would handle PK duties, but an injury to Fabian Johnson, not to mention a golazo from Paul Aguilar, thwarted that plan. Rating: 6

Fabian Johnson—Mexico's three-pronged attack put the U.S. on its back foot all game long and forced the offensive-minded fullback to focus on his defensive duties. He's a capable defender, but Johnson's ability to push forward is what makes him special. Against Mexico, he was not special. Rating: 6

Geoff Cameron—After years of campaigning to play central defense for both club and country, Cameron now starts in that role for Stoke City and got the nod Saturday night against Mexico. He played solid defense, used his strength and size well, and scored a crucial first-half goal that leveled the contest. Rating: 7

SEE SIDE-BY-SIDE RATINGS, AND CREATE YOUR OWN

Matt Besler—The Sporting Kansas City centerback rekindled memories of Jay DeMerit in the 2009 Confederations Cup match against Spain—diving, sprawling, lunging, and otherwise defending with desperation against a superior opponent. Besler probably should have been called for a penalty after a pass struck his outstretched arm late in the match, but since the referee didn't call it we won't mark him down for it here. Rating: 7

DaMarcus Beasley—Mexico focused its attack on Beasley's side of the pitch and scored three goals in the process—that pretty much sums it up. The 33-year-old gave it his all but he was turned and burned on several occasions. Rating: 4

Jermaine Jones—Filling in on the right wing for Alejandro Bedoya, Jones played a gritty match—he was absolutely fearless, per usual—and showed flashes of skill and plenty of desire. But he has clearly lost a step or two and did not create much danger from his side of the pitch. The game needed a galloping run or incisive pass from Jones, and it just wasn't there Saturday night. Rating: 6

Michael Bradley—His perfectly weighted free kick in the 15th minute found Cameron's forehead and equalized the game but the U.S. captain could not conjure up any more magic against El Tri. He tracked back, as always, and showed remarkable conditioning and resolve. But Mexico won the midfield battle, and part of that has to be attributed to Bradley. Rating: 6

Kyle Beckerman—Nobody will ever question Beckerman's desire but he once again seemed a step too slow against a top-tier opponent. Rating: 4.5

Gyasi Zardes—The SoCal native never threatened the Mexican defense and his linkup play—Zardes' strong suit for the U.S. national team all year long—was minimal. That may say more about his partners in attack, however. Rating: 5

Clint Dempsey—A brutal performance by the one-time U.S. captain. He disappeared for long stretches, never demonstrated any of his trademark verve or passion, and when he did get on the ball in the attacking third he either went to ground hoping for a call or gave away possession. Perhaps he was sick or injured—that might help explain his poor performance. He was the worst player on the pitch. Rating: 3

Jozy Altidore—Dempsey's strike partner in the 4-4-2 had a stinker too. Altidore isn't particularly fast or technical, so he has to rely on his considerable physical strength to retain possession, bring others into the attack, and connect on linking passes. Despite a few promising sequences and one shot on goal early in the second half, Altidore looked like a one-dimensional striker in a match that required versatility. Also, he ran out of gas somewhere around the 75th minute but stayed on until the 98th. Rating: 4

DeAndre Yedlin—The U.S. attack needed a spark and Yedlin provided just that, using his speed and flamboyance to run at the Mexican defense. The Sunderland wing registered a lovely assist on Bobby Wood's extra time goal. He probably should have come into the contest earlier than he did. Rating: 6.5

Bobby Wood—It helps to be young and fast. Until Yedlin and Wood came on, however, the United States' attack was neither. Wood scored a great goal exactly 10 minutes after he replaced a throughly spent Altidore. American fans can't help but wonder how this match might have played out if Wood had seen more than 22 minutes of game time. Rating: 8

Brad Evans—A non-factor in his 11 minutes. No Rating

Jurgen Klinsmann—For the first time in his 50-month tenure, U.S. soccer fans are calling for Klinsmann's head. His personnel decisions against Mexico—in particular his reluctance to replace his two ineffective forwards—won't help as the drumbeat for a change gets louder and louder. Rating: 4

John Godfrey is the founder and editor in chief of American Soccer Now. He wants you to create your U.S. player ratings here and/or leave comments below.