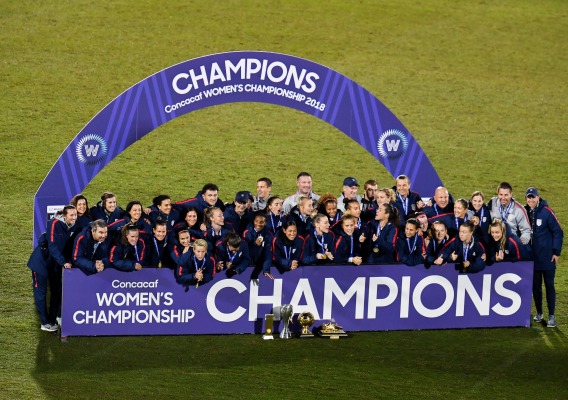 USWNT rolls past Canada to build momentum heading into 2019

The United States women's team cruised past Canada to win the 2018 CONCACAF title. ASN's John Halloran takes a look at the big picture of how the team is shaping up as 2019 approaches.
BY John Halloran Posted
October 18, 2018
6:30 AM
WITH A 2-0 win over Canada on Wednesday night in Frisco, Texas, the United States women’s national team won the 2018 CONCACAF Women’s Championship, and its third tournament of 2018 after capturing the SheBelieves Cup in March and the Tournament of Nations title in August.

The team hasn’t lost a match in over a year, in a streak now extended to 26 games and going all the way back to July 2017. And despite the relative ease of competition in the CONCACAF tournament, the Americans have gone 8-0-3 against teams ranked in the top 10 during their unbeaten stretch.

The U.S. also earned this most recent title on the back of five straight shutouts and a +26 goal differential over the length of the tournament.

By any measure, the team is rolling.

Much of the credit for the team’s recent run of form must go to head coach Jill Ellis, whose switch to a 4-3-3 last summer proved a revelation. Moving Julie Ertz into the defensive midfield position, Ellis took advantage of her former center back’s ability to break up plays, while simultaneously freeing up the U.S.’ outside backs to go forward with abandon—a longtime goal of the coach.

The formation change-up also cut Megan Rapinoe and Tobin Heath loose on the wings, allowing them to attack with abandon, unchained from the responsibility of tracking back when played as more traditional outside midfielders. Additionally, the coach has overseen the return of Alex Morgan to top form, now as the team’s lone No. 9, and turned over the keys to the midfield to a new generation of playmakers in youngsters Lindsey Horan and Rose Lavelle.

As a result, the U.S. has moved away from its long-held tradition of direct play coupled with speed and superior fitness and, instead, implemented a system that dominates in possession and blankets opponents in suffocating defensive pressure as soon as the ball is lost.

Despite near-constant declarations that the world is catching up, that the development system is failing, and that the end of American superiority is right around the corner, the U.S. women have simply dominated all-comers over the past 15 months and done so in a way that harkens back to the American teams of yore.

Looking at the beginning of this most recent World Cup cycle, the U.S.’ recent progress seems particularly surprising.

Coming off the team’s devastating loss to Sweden in the quarterfinals of the 2016 Olympics, Ellis began a bold plan to remake the team’s roster and tactics. And little went right through the first year of those experiments.

The coach made a number of head-scratching decisions in that early stretch, like playing Allie Long at center back, and searched for a way to get an extra player into the attack by moving the team into an ill-fated three-back for a six-month period. Ellis also moved away from veteran players like Ali Krieger and Whitney Engen without having proven replacements at the ready, leaving the team with a temporary carousel at right back and forcing the team into a handful of matches last year with players deployed out of position at center back.

In total, the coach has brought in nearly 60 players during this new cycle, leaving a mish-mash feeling to many of the rosters in 2016 and 2017 and creating an unease in fans and players alike.

Slowly, however, Ellis’ much-mocked experimentation phase began to take shape. The team abandoned the three-back, but eventually found a way to get its outside backs into the attack without exposing the center backs by putting Ertz in as the No. 6.

Abby Dahlkemper and Tierna Davidson proved their mettle and won roster spots as part of a new generation of center backs and Crystal Dunn underwent another positional change to become indispensable at left back. The full maturation of Lindsey Horan—who Ellis first moved into the midfield in 2016 after a youth career as a forward—and the recent bloom of Rose Lavelle have provided a far more dynamic and creative midfield presence for the U.S. than its old guard.

Late last year, when Ellis was still fully engrossed in the tinkering phase, many critics pointed to the team’s lack of chemistry as proof that the coach was really just a mad scientist. Now, as the front line of Rapinoe, Heath, and Morgan seamlessly interchange on the attack and the new midfield combination of Lavelle and Horan dictate play in the center of the park, some have ironically leveled a new charge—that the team is peaking too early for next summer’s World Cup.

To be sure, there are still questions to be asked of Ellis. Her reliance on Alyssa Naeher in the net through some high-profile mistakes early in the cycle with either prove to be a great decision with the coach giving her keeper confidence through a rough patch, or a disaster if Naeher makes another such mistake next summer with Ellis rarely giving other goalkeepers opportunities in matches over the past three years.

Ellis also has a history of making the right tactical decisions only after exhausting every other option, like she did before bringing Morgan Brian into the starting XI in the 2015 World Cup, or not seeing the genius of moving Ertz into the defensive midfield position sooner—especially when Ertz had been dominant at the position in her club play in 2017. Additionally, the coach has a penchant for poorly explaining many of her decisions to the public, often resulting in a confusing word salad that belies the reflection and true introspection going on behind the scenes.

Even against Canada on Wednesday, Ellis confusingly waited until the 88th minute to make her first substitution of the night, despite the fact that the U.S. starters were playing their fourth game in 14 days. Some have also criticized her overuse of players in the past, and tension rose to a particular high point this year with players being pulled from their National Women’s Soccer League teams early for international camps.

Still, it’s wildly unfair not to give Ellis credit for what she has built with this U.S. squad and the prolific, free-flowing, and technical soccer they are playing right now. In comparison to the stagnation and trudging World Cup qualifiers of 2015—and even the stodgy attack of the team that won the last World Cup—Ellis’ 2018 edition of the U.S. women is a breath of fresh air.

Managing the deepest roster in the world, the coach is making tactical and personnel decisions at the razor’s edge. With a team full of the most competitive personalities in the game, and many veterans being moved into reduced roles, keeping everyone on the same page and finding results the way the U.S. has over the past year, Ellis deserves full credit for the team’s success.