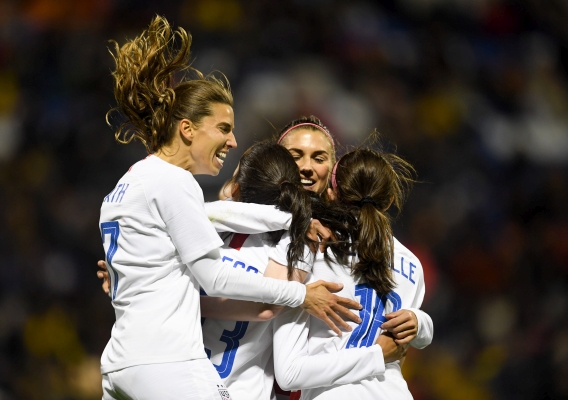 After falling to France on Saturday, the USWNT rebounded on Tuesday with a quality 1-0 win over Spain. ASN's John Halloran is here to break the game down.
BY John Halloran Posted
January 22, 2019
3:00 PM
THE UNITED STATES women’s national team picked up its first win of 2019 on Tuesday night in Alicante, defeating Spain 1-0 on the back of a Christen Press goal.

Coming off its first loss in a year and a half this past weekend—a 3-1 loss to France on Saturday—the Americans rebounded well against the Spanish. Early in the contest, La Roja controlled the tempo and held the vast majority of the possession before the U.S. finally started to find some cracks. But despite some solid attacking combinations, especially between Megan Rapinoe and Lindsey Horan, the Americans struggled to create quality chances and the match remained tied 0-0 at the half.

In the second stanza, the Americans fared a bit better and Press broke the deadlock with a stunning 60-yard run and finish in the 55th minute. Picking up the ball 10 yards inside her own half, the attacker ran straight at and past the Spanish defense before calmly slotting home for the game-winner.

Press, probably the U.S.’ best player three days earlier against France, did well again on Tuesday and did the most of any American player to improve their value during this camp.


#USWNT pick up 1-0 win vs. Spain thanks to a @ChristenPress goal. Win helps @ussoccer_wnt rebound from a 3-1 win at France last week. #RoadToFrance pic.twitter.com/GAsidP7Mlw

Julie Ertz’ performance proved to be another bright spot of the game against Spain, as the midfielder’s return to the lineup—after missing the France game with a minor injury—helped bolster the U.S. defense and provide a spark to the attack. Ertz won numerous tackles on Tuesday to win possessions against a feisty Spanish side, and helped jump start the offense with smart, simple switches out of the back. The fact remains, the Americans are simply a different team with Ertz in the lineup.

The final positive belonged to forward Jess McDonald, who came on in the 60th minute of the match. McDonald’s holdup play, combinations, runs down the line, defensive work rate, and service all provided a much-needed boost for the Americans down the stretch. She may still be a long shot for the final 23-player World Cup roster, but a few more games like Tuesday’s could go a long way towards getting her a seat on the plane to France this summer.

On the negative side, a number of U.S. players did not impress. Emily Sonnett, starting again at right back for the injured Kelley O’Hara, gave away the ball cheaply and too often. And with a continued rotation of players at outside back, there is still no obvious answer for how to fill the backline should the oft-injured O’Hara be unavailable this summer. Alex Morgan also struggled and was caught offside over and over again, including numerous occasions on the weak side of the field when she should have been able to see the line and hold her run.

Finally, Tobin Heath had one of her weaker games in recent memory. While Heath can be unworldly when dialed in, showcasing a dazzling array of skills that make her nearly unstoppable, she gave the ball away on almost every worthwhile possession on Tuesday. While it’s doubtful that one such performance could or should shake up head coach Jill Ellis’ first XI, strong continued performances from Press might give the coach something to think about in the final few months before the World Cup.