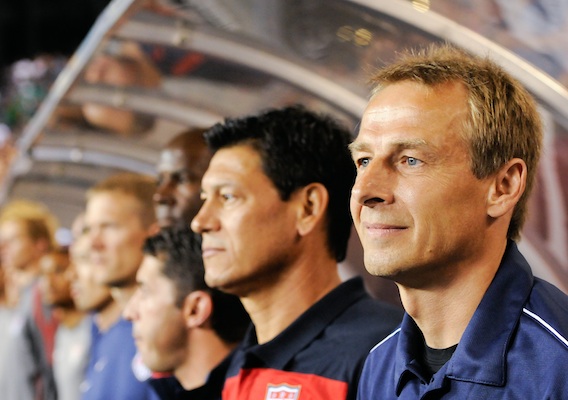 Tactics to Watch for Against A&B and Guatemala

Now that Jurgen Klinsmann has called in his roster, it’s time to take a look at the next two U.S. opponents, both of which provided unique challenges in the teams’ first encounters.
BY Liviu Bird Posted
October 10, 2012
1:00 PM

Anything less than six points from matches against Antigua & Barbuda away and Guatemala at home will be a disappointment for the United States national team. And there's that whole "qualifying for the next round" thing, which is still up in the air.

The good news is that the Americans have faced both opponents already, coming away relatively unscathed. The U.S. defeated A&B to start the semifinal qualification round and earned a point in Guatemala.

Taking each opponent in turn, let’s look at what the U.S. learned from those encounters and how that may affect the second matches.

The highlight video from the United States’ first fixture with Antigua shows why Klinsmann called in Eddie Johnson, who has scored nine goals with his head in MLS play this season. Take a look at Antigua’s defensive shape at the 0:50 and 7:25 mark of the video:

To call it “packed in” doesn’t even begin to describe the level of caution Antigua is taking. Two solid blocks of four players—and an additional midfielder—make it difficult for the Americans to penetrate through the middle of the field.

The way Klinsmann’s boys will have to take advantage, ugly as it may be, is on crossed balls into the box. Set pieces, such as Carlos Bocanegra’s eighth-minute goal, will also be crucial.

It won’t make for a particularly entertaining game, but teams have to take advantage of what their opponents give them. In the match in Tampa, the Americans had 14 corner kicks.

Another way to break down the Antiguan defense will be to draw it out with possession. Playing two compact blocks of players in defense leaves room to play in front of them, and it also leaves the outside backs free to overlap.

At 5:30 of the highlights above, Carlos Bocanegra gets around Landon Donovan on the left-hand side. The problem with that is the susceptibility to the counterattack that comes with pushing too many numbers forward; Antigua’s only goal of the game offers a prime example.

Atmosphere was the big factor in the United States’ June game against the Chapines. The importance of playing at home, in front of a pro-U.S. crowd, will be apparent in this second matchup.

Guatemala plays as many Central American teams do, making it a typical CONCACAF nation that Klinsmann warned about during his teleconference on Monday. It’s an individual-heavy team that relies on creativity on the ball in the attack, both in the middle of the field and on the flanks.

It will be important for the U.S. to defend well one-on-one, standing attackers up and not diving into tackles, as well as keeping proper defensive shape. On the other side of the ball, movement will be crucial.

Central American teams like to dive into the tackle and chase players with the ball. It opens up space for the U.S. to play among them as defenders get stretched, delivering the free-flowing soccer that Klinsmann wants his team to play. The home-field advantages should play into this strategy as well.

Clint Dempsey’s goal in the first encounter (the play starts at 2:10 of the video above) is a prime example. At the end, he deftly touches the ball around two defenders who needlessly dive in at his feet:

Graham Zusi’s role will be magnified in this game, especially in his home stadium. The midfielder is a possession master, retaining the ball for his club team and springing dangerous attacks with his vision on the ball. He can reprise this role for the Stars and Stripes.

Liviu Bird is an assistant editor at Prost Amerika and a contributor to the New York Times Goal Blog. Follow him on Twitter at @LiviuBird