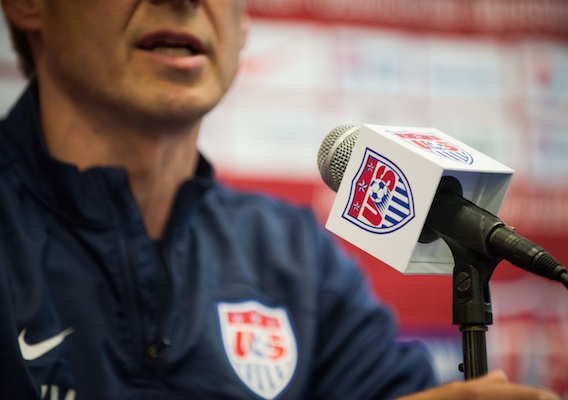 US Roster: What Klinsmann Said, and What We Heard

As the 2014 World Cup camp opened in Palo Alto, Calif., U.S. national team coach Jurgen Klinsmann spoke about his roster, his plans, and the next three weeks. And then John Godfrey interpreted his words.
BY John Godfrey Posted
May 15, 2014
10:04 AM
WHAT KLINSMANN SAID ABOUT POSITIONAL BATTLES
"Going into Stanford now there will be more 50/50 situations: Center backs, fullbacks, two or three midfielders, and strikers that will compete for spots. The good thing about the next three weeks before we have to name them on June 2 is that we can see them every day. We can see them compete with each other day-in and day-out. We play our scrimmages; we see a lot going on. We get a feel for the chemistry, which is very important for the spirit of the team, the way they help each other and bond with each other, before naming then on June 2 the 23 going to Brazil."


WHAT WE HEARD: This is a reality show now. And I'm Jeff Probst, Padma Lakshmi, Donald Trump, Tim Gunn, and Simon Cowell rolled into one.

WHAT KLINSMANN SAID ABOUT EXCLUDING EDDIE JOHNSON
"His comments and recent couple weeks actually had nothing to do with the decision. I spoke with Eddie for a long time on the phone and I tried to explain this as well as I can."


WHAT WE HEARD: See "chemistry" and "spirit of the team," above.

WHAT KLINSMANN SAID ABOUT LANDON DONOVAN
"I don’t see Landon as a midfielder coming in, I see him clearly as a striker."
And:
"He has to win a spot and convince the coaches that it’s the right decision to have him be a part of the team. It’s just normal. For me this is very, very normal, and again, with all the appreciation, with all the admiration for what he’s done throughout his career, which is extraordinary and deserves the compliments that he gets, but soccer is about what happens today and what you do today, and what you hopefully do tomorrow."


WHAT WE HEARD: Soccer is about what happens today.

WHAY KLINSMANN SAID ABOUT JOZY ALTIDORE
"Jozy is still a very young player and he is going into his learning curve. We have worked with him now over the last three years, and he’s gone from a much younger player into a more mature player, playing very good games for us and scoring important goals for us. Still, we see Jozy in his development phase. Jozy is not built yet. Jozy has not reached his potential yet. Our job, as coaches, is to help him reach his highest potential. I think the next two months will be a big part of that next learning curve for Jozy Altidore. I’ve always said that he has upside; he hasn’t shown it yet in different places maybe. Obviously he has to work the next couple of weeks to confirm our trust, which we think he will absolutely do. But I think he is still a player to be developed; he is not there yet.”


WHAT WE HEARD:
I don't think Jozy has arrived yet. The bigger question: Does Jozy think Jozy has arrived yet? The Sunderland debacle can be the beginning of the end or the end of the beginning—it's up to him. If Jozy works his tail off, earns his starting spot, and scores a couple of goals this summer, he can move to a higher level. If not, well, Major League Soccer needs to spend that $90 million/year somehow...

WHAT KLINSMANN SAID ABOUT TIMOTHY CHANDLER
“Timmy has done extremely well throughout most of the season. The last part was based on a knee surgery that he was out, and I was always in touch with him. He knew that he has to do a lot more work to come back into our picture because of the situation that happened in Honduras and how I looked at the team developing, and the team did extremely well last summer obviously with World Cup Qualifying and the Gold Cup. He got the message and worked harder and played on a very high level throughout the season until the knee surgery came. I encouraged him to keep going and he is fully fit again. He played the last two games—he was disqualified on the weekend—but the two games before he played. I had him scouted many times in training and I think he is a player that can make a difference if he is on his highest level. He has experience playing against very good and strong players throughout Europe, and that’s why he earned his way back into the group.”


WHAT WE HEARD: Desperate times call for desperate measures. I have no idea who will be starting on the back line for us on June 16, and if Chandler isn't 100% committed we will drop him approximately 30 seconds after the Azerbaijan match.

WHAT KLINSMANN SAID ABOUT OMAR GONZALEZ
“We are not concerned at all about Omar’s [knee] condition. It’s a very short period of time that he can’t go at 100 percent so by the end of the week he should be at 100 percent already. We will have him at the beginning of next week at full speed, going with the group. Thankfully, the injury wasn’t that bad and it didn’t take him out for much longer."


WHAT WE HEARD: Oh, I'm worried all right—just not about his knee.

WHAT KLINSMANN SAID ABOUT CHRIS WONDOLOWSKI
"His personality, he doesn’t have to change anything. Every time he comes to the National Team environment, he gives you everything he has. He always goes 1000 percent. He knows he’s getting evaluated by the coaches and what he’s doing day in, day out. He personally doesn’t have to do anything different in how he has done things over the last year. We’re looking forward to working with Wondo because it’s always a pleasure to have him in camp. He is a competitor. He is determined. You give him a one percent chance and he wants to make it 100 percent at the end of the day."


WHAT WE HEARD: Remember how I talked up Kyle Beckerman over and over again to motivate my defensive players? That's what I'm doing here for my attackers. Fingers crossed!

WHAT KLINSMANN SAID ABOUT ALEJANDRO BEDOYA
“Alejandro definitely had a very good season with Nantes in France, and also the fact that he went there in the first place, he stepped it up and became more mature. He developed more drive and more consistency in his game and he showed that in his games with us as well. He confirmed his learning curve at Nantes also within our environment. That’s big. When you play games against Paris Saint-Germain, Olympique de Marseille, AS Monaco, and you play well and you might even score or create chances against those teams, that’s great and makes us proud as well. He’s taken a big step forward over the past 12 or 18 months and now comes another big step.”


WHAT WE HEARD: Alejandro is on the plane.

WHAT KLINSMANN SAID ABOUT BESLER AND ZUSI
“In every cycle between World Cups you have players coming into the group. First they’re kind of new and they have to get their feet wet, and then they develop into more and more mature and more and more responsible players. I think both of them are role models in how you can see over a short period of time how they take over responsibilities and how they become a really important part of a program. Both players are very driven, they both know what it means to be a 24/7 professional player and they stepped it up every couple of months, a little bit more, a little bit more."


WHAT WE HEARD: Both are on the plane, and both are likely to start.


 WHAT KLINSMANN SAID ABOUT YEDLIN AND GREEN
"With Julian and DeAndre, we have two huge talents being part of that 30-man roster. I think it will be interesting to see how they take that challenge. They don’t have the experience like other players have. It will be interesting for us coaches to see how they take it on and how they now compete for the 23-man roster. I think if you analyze both players, they have tremendous upside in their development curve going forward. We will see that now over the next three weeks if they are ready for a World Cup or not.”


WHAT WE HEARD: Michael Owen did a pretty good job for England in 1998, when he was 18. There aren't a lot of huge talents in the player pool. I would love to take both players to Brazil.

WHAT KLINSMANN SAID ABOUT CAMP
“The next three weeks are definitely about the form they are in. The players know I don’t have to name them right now; they know they have a battle ahead of them. It is a daily competition. It is an awesome competition to be in because it’s about going to the World Cup."


WHAT WE HEARD: The next three weeks are definitely about the form they are in. The players know I don’t have to name them right now; they know they have a battle ahead of them. It is a daily competition. It is an awesome competition to be in because it’s about going to the World Cup.

That's what John Godfrey heard. What did you hear? Tell us below.