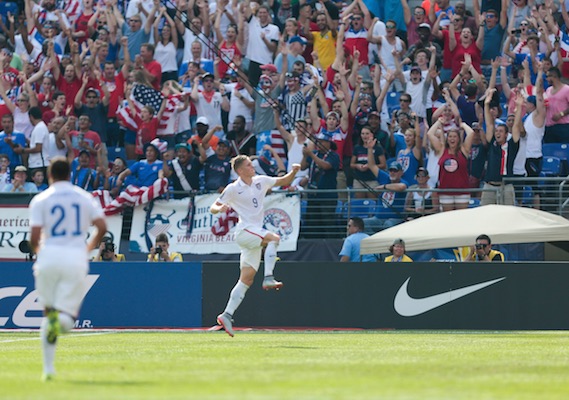 First-half goals from Clint Dempsey, Gyasi Zardes, Aron Johannsson, and Omar Gonzalez put the match out of reach as the Red, White, and Blue's posted its most complete performance of the Gold Cup.
BY Noah Davis Posted
July 18, 2015
6:55 PM

BALTIMORE—While the sweltering heat at M&T Bank Stadium wouldn't have been out of place in Havana, it was the United States men's national team that looked comfortable, scoring early in its Gold Cup quarterfinal match against Cuba and dominating throughout Saturday afternoon's 6-0 thrashing.

The Americans will meet the winner of this evening's Haiti-Jamaica game in the semifinals in Atlanta on Wednesday.

It took just four minutes for the U.S. to find the back of the net. Timmy Chandler, starting at right back despite a string of poor performances, lofted a curling left-footed cross that found Clint Dempsey unmarked just outside the six-yard box. The Seattle Sounders forward rose up and headed the ball over Cuban goalkeeper Diosvelis Guerra, who had no chance at the save. It was Dempsey's fourth goal of the tournament.

After the tally, the Americans continued to press and own a majority of the possession, with Alejandro Bedoya especially active on the left flank. Aron Johannsson nearly scored off the midfielder's low cross but a sliding Cuban defender stopped the ball before it doubled the advantage.

The partisan crowd, however, didn't need to wait long for the Stars and Stripes to find a second. After Johannsson drew a foul in the midfield, Michael Bradley sent the restart to Fabian Johnson in the left channel. His cross—a near mirror of Chandler's—arched over the Cuban backline and directly into the path of Gyasi Zardes whose right-footed tap-in volley didn't miss.

Up two goals and under little pressure, the Americans were content to kick the ball around the field, get everyone involved, and focus on possession rather than attacking the embattled Cuban net. Given the 91.5-degree temperature at kickoff, this was not a bad strategy. After the fireworks of the opening quarter hour, the players, the fans, and your humble correspondent deserved a respite.

In the 32nd minute, Bradley and Johannsson decided enough was enough. The American captain picked up the ball behind the halfway line and saw his foward making a run at the Cuban back line. His long ball took a bounce, which allowed Johannsson, now completely alone, time to look up and see Guerra off his line. A deft chip. A goal.

And fin. Or, rather, a FIFA-mandated water break.

In the 39th minute, Brad Guzan made a save on a rolling shot that went right to him.

Four minutes later, Zardes atttempted the Johannsson Chip (patent pending) after—what else?—a long ball from Bradley but his touch was too heavy and the ball floated over the net for a goal kick. There's always next time, kid.

Just before halftime, the Americans found a fourth. Bradley's corner went to Johannsson, who was streaking in at the far post. He headed the ball back into the middle, where a sliding Omar Gonzalez got there before the defense and put it home. It was more scrappy than pretty, so no Vine highlight.

After the break, Joe Corona replaced Kyle Beckerman while Brad Evans came on for Chandler, who left due to right knee soreness. Cuba, down to 18 men after five defections, kept the same 11 on the field. In the 57th minute, however, Armando Coroneaux would take over for Liban Dairon Perez in the first excitement of the second stanza.

The Americans got a fifth from the penalty spot in the 64th minute. In the play leading up to the foul, Bradley found Evans with space on the right flank. The Sounders player sent in a nicely weighted cross that looked destined for Johannsson's head until Angel Horta Lopez dragged the attacker down. Referee Henry Bejarano pointed to the spot and Dempsey did the rest, chipping the keeper. Of course he did.

Moments later, DeAndre Yedlin replaced Johnson. He moved to right midfield with Bedoya dropping to left back because why not?

In the 78th minute, Dempsey completed his first national team hat trick. Cuba conceded a two-on-one break with the ball at Bradley's feet. The captain could have shot from 18 but unselfishly chose to slide it across the box to his teammate. The pass looked like too much at first, but the forward adjusted his run, reached the ball, and scored with the outside of his right foot.

The crowd started the wave. There was much to celebrate.